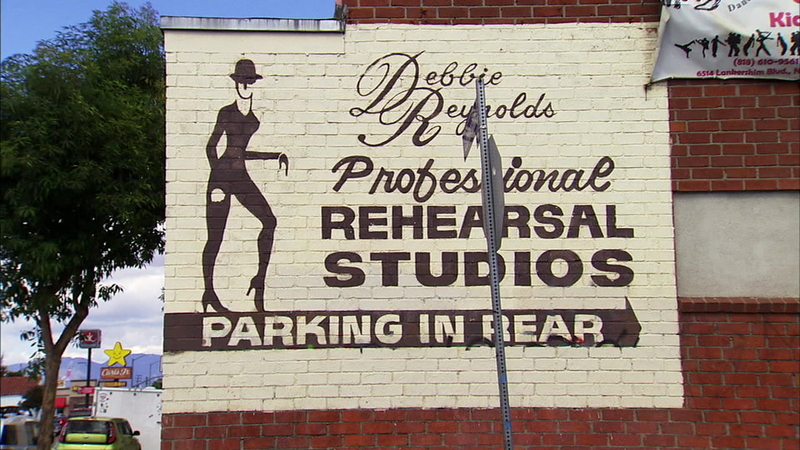 Debbie Reynolds' dance studio in NoHo to be demolished

But Teresa Espinosa, who owns the business but not the building, is one of many people upset that the beloved space will be gone.

"I have a lot of faith and hope that love is going to win here," she said.

Reynolds' son, Todd Fisher, said the place was sold because it would have been hard to keep at the time.

"Well she ran it for her lifetime, and it was her desire that that would have kept going. We didn't realize the tax laws were going to be as such that it would cost $2 million cash just to keep the place. Ironically, a year later, the tax laws change and we could have kept it," he said.

Fisher said his mother always said dancing made her happy. She purposely made prices affordable so more people could dance.

"I built a family, so this place is not only a studio - it's a home. So I fear that if it does go away, then I'm going to lose that unit. And yes, we can go other places, but there's literally nothing like this place," said Lauren Gerard, a scholarship program recipient.

Stars like Michael Jackson rehearsed "Thriller" at the studio, and John Travolta and Olivia Newton John worked on "Grease." And that's just a tiny sampling of its Hollywood history.

There's now a change.org petition with thousands of signatures to keep the place open, and a plan to get the building historical landmark status.

But it's really up to the new owner, Alan Kleinman, who did not comment for Eyewitness News.

"I'm just an extremely passionate person that believes that our dreams can come true. So for me, I can't just walk away and walk away from what Debbie's built and what she's given to generations of people across the world," Espinosa said.