KABC
By Miriam Hernandez
LOS ANGELES (KABC) -- The defense attorney of a man accused of torturing and murdering his girlfriend's son in Palmdale began his case Monday, trying to prove the death was accidental.

Four minutes of video was shown of defendant Isauro Aguirre. He's emotional as he is questioned by the Special Victim's unit.

He confesses he hit 8-year-old Gabriel Fernandez, and describes his frustration level at 20 on a scale of one to 10.

But the defense said the prosecution unfairly cherry picked the clips, showing Aguirre in the worst light.

Only now, on the first day of the defense case, can jurors see what Aguirre's attorney's contend is Aguirre's remorse - tearful, wiping his eyes with his shirt.

The defense followed up, asking the judge that the whole tape be played, but the judge denied that request.

Earlier in the day, the defense deflected blame to Gabriel's mother, Pearl Fernandez, and called witnesses who portrayed her as a bad mother.

No pictures were allowed of these witnesses, but one was Pilar Rios. Her son and Fernandez had a baby together named Destiny.

Pilar Rios testified through a translator that Fernandez fed the infant junk food and soft drinks.

"She didn't give her her formula the way you should with a newborn child. She would give her soda, colas and juices," the translator explained.

Pilar Rios added that Fernandez would give the little girl food from McDonald's and she would throw up. The grandmother said Destiny's clothes would always be dirty with vomit.

He said he was concerned about Destiny's well being when he left his daughter in Fernandez's care because of what he knew Fernandez to be.

The defense was seeking to raise questions such as, "Was Fernandez's parenting part of a pattern?"

The coroner testified that Gabriel was underweight and malnourished. The young boy weighed 59 pounds at death.

What still faces the defense are the multiple injuries which showed Gabriel at times was restrained in handcuffs, concealed in a cabinet, burned with cigarettes, had his hair pulled out and was shot with BBs.

A detective was asked to describe those injuries. To the dismay of the defense, he volunteered much more.

"They were the worst injuries I've ever seen on a child," said Detective Elliot Uribe of the Los Angeles County Sheriff's Department Special Victims Unit. Grandfather of slain Palmdale boy says Gabriel was like his son 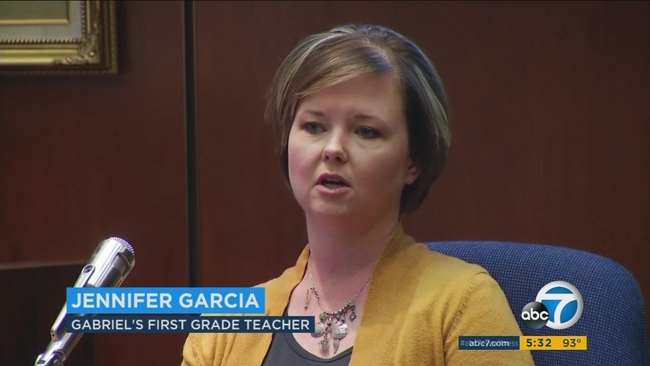