Amid mounting calls to "defund the police," the Los Angeles City Council on Tuesday voted to study ways to slash the Los Angeles Police Department's budget by $100 million to $150 million.
KABC
By Marc Cota-Robles 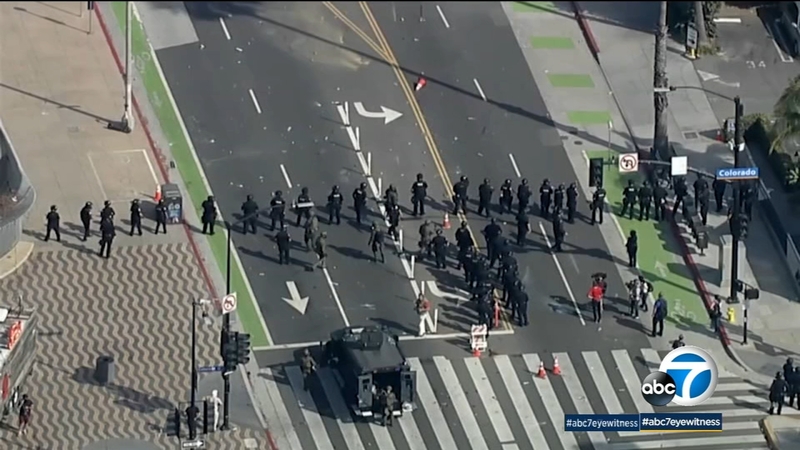 LOS ANGELES (KABC) -- Amid mounting calls to "defund the police," the Los Angeles City Council on Tuesday voted to study ways to slash the Los Angeles Police Department's budget by $100 million to $150 million.

Although community activists presented their idea for more dramatic reductions in law enforcement spending, the city's Budget and Finance Committee sent the proposal to the full council.

The People's Budget LA proposal was developed by a coalition of organizations led by Black Lives Matter's Los Angeles chapter, and it seeks to have the LAPD's proposed budget cut by 90%, with the funds allocated to social services, such as mental health and housing. LAPD's proposed operating budget for the next fiscal year is about $1.86 billion.

Five representatives from organizations in support of the People's Budget spoke to a gathering of one-third of the council, outlining results of a public survey about their proposed budget and discussing their vision for community policing.

David Turner of Black Lives Matter-LA said his parents struggled to get by and often argued, causing the police to show up at their home instead of family therapy workers.

"The police never helped the situation,'' Turner said. "Somebody always went to jail ... it was my mom or it was my dad, and because of that it broke my family apart and neither one of my parents are alive today because the stress and because we don't invest in family therapy or restorative justice.''

Turner said he's close to earning a doctorate, but there are many people who grew up in similar situations who are unable to reach the same achievements.

Actor and activist Kendrick Sampson, who founded the organization Build Power, which also goes by BLD PWR, said he wants elected officials to start re-imagining the way policing is done.

Sampson said he and his assistant were significantly injured by police officers who responded to peaceful protests about two weeks ago.

"We have a really low bar with policing in terms of imagining differently for public safety, and we can imagine differently,'' Sampson said. "I don't think it's that hard, to be completely honest, but I would like to offer up, if anybody needs help, there's a whole industry here of people who imagine and get paid to imagine and ... we will offer that help up.''

"I thank the People's Budget LA for your strong presentation to the City Council today,'' Garcetti said. "I will continue to work with my colleagues on the City Council to further invest in the needs of our communities to create lasting change.''

Council President Nury Martinez, who along with four other council members introduced the motion cutting up to $150 million from LAPD's budget, said the People's Budget is straightforward in its demands and that it's not complicated.'' But she also said the city is limited in its capacity on certain provisions. One of the biggest limitations is that the county, not the city, is charged with addressing public health issues, such as addressing the COVID-19 pandemic.

"I think all of us are challenged with the fact that there is certain things we can do,'' Martinez said. It's not an excuse, but everyone needs to do their fair share and make sure that they show up, not only for Angelenos but for people who live in the county of L.A. So for me, I am committed to continuing to re-imagine what my neighborhoods look like, what I want for my kid when she becomes a mom.''

Councilman Mike Bonin said he would like the report on LAPD budget cuts to take into account emergency and non-emergency calls the agency receives and what drives its overtime costs, as well as recommendations that don't shelter any part of the police budget.

"I think we owe it to Los Angeles to come up with a better and a smarter way of doing public safety and emergency response, and I think this motion is the first step in doing that,'' Bonin said. It's not about random slashing and cuts. It's about re-prioritizing and ... to invest in neighborhood safety, and there's ways to do that.''

RELATED: Poll: Majority of Americans do not support 'defund the police' movement

The city's general fund revenue outlook by the end of the 2019-2020 fiscal year, which ends June 30, is looking worse than it did a month ago.

According to city documents, based on May receipts, estimates from the Office of Finance, the Department of Transportation and new information concerning sales and electricity users tax receipts show the city's revenue for 2019-2020 is estimated to be $6.32 billion -- $145 million below the revised budget and $253.5 million below the proposed budget.

The Budget and Finance Committee is expected to meet again next Monday and June 29 before adopting a budget by June 30. Council members have said the budget will continue to be worked on throughout the next fiscal year, which begins July 1.

Meanwhile, LAPD, which had almost 10,000 officers working every day for a week, reportedly spent over $40 million on officers working overtime due to the coronavirus pandemic and recent protests against police brutality, and the department will be paying all overtime earned after June 7 in compensation time.

The department spent more than it had been allotted for emergencies after the entire department was working every day for a week starting May 30, due to widespread protests sparked by the in-custody death of George Floyd in Minneapolis, according to the Los Angeles Times.

Chief Michel Moore told staff in a memorandum that the LAPD is too cash-strapped to pay the overtime accumulated after June 7, and instead it will be paid in compensation time, The Times reported.

"I recognize that you have worked tirelessly these past couple weeks during the protests and prior to that during the Safer At Home order. Your dedication and commitment have not gone unnoticed. During this extraordinary time, including the full mobilization of our sworn members, the department has expended more than $40 million dollars in overtime expenses,'' Moore wrote Thursday, according to The Times.

Moore also said the department is canceling all non-essential overtime, which includes work on cannabis and human trafficking task forces, The Times reported

Moore directed supervisors to attempt to ensure essential overtime,'' which includes appearing in court, according to The Times.