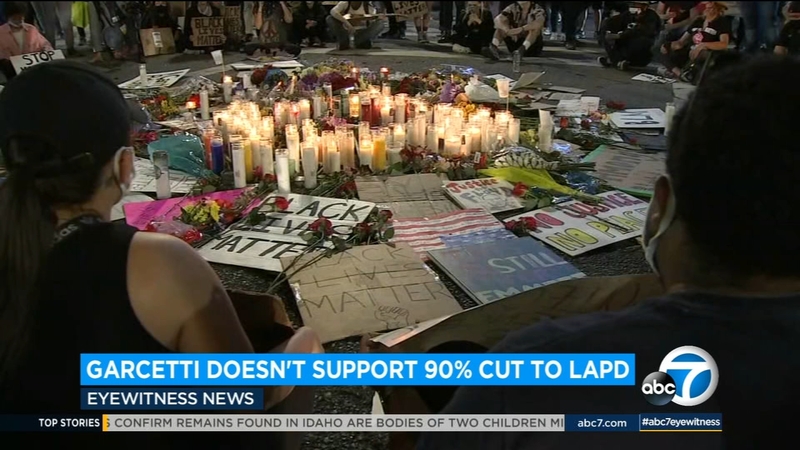 Instead, the mayor wants to shift money previously allocated to the LAPD and other departments to spend an additional $250 million in predominately black communities to address health and education issues. However, specific details have not yet been announced.

"I agree with the sentiment that this is just a start, and my promise to people is we have to think about reimagining public safety. But we have to do that carefully, boldly and at the same time in an inclusive way so our officers don't shoulder things like mental health and mental health disproportionately," Garcetti said during a press conference Wednesday.

RELATED: Protesters want to 'defund the LAPD' and other police agencies after George Floyd's death

The mayor also says he sent a letter of support to the California Legislative Black Caucus regarding its proposals to provide reparations to African Americans for slavery to restore voting rights to people on parole for felony convictions, and to end the state's ban on affirmative action.

Melina Abdullah, a co-founder of BLM-LA, told City News Service she wasn't surprised Garcetti wouldn't support the People's Budget, as she claims the mayor hasn't cut enough from the LAPD budget, even in his latest proposal.

Abdullah said Garcetti's proposal to cut up to $150 million from the LAPD budget is politically motivated, as he made the announcement only after thousands of people showed up at his residence and at City Hall.

"The only thing he responds to is political calculations,'' Abdullah said. "We have to make clear that his political ambition will not be reached if he doesn't represent the people he claims to represent.''

Black Lives Matter will hold a virtual town hall meeting Thursday night about defunding the police, one of several protests or demonstrations being held around Los Angeles County.

The event will be streamed live on the group's Facebook page beginning at 7 p.m.

"We'll have an in-depth conversation on what it means to defund the police and the road to police abolition,'' according to a post on the Black Lives Matter page.