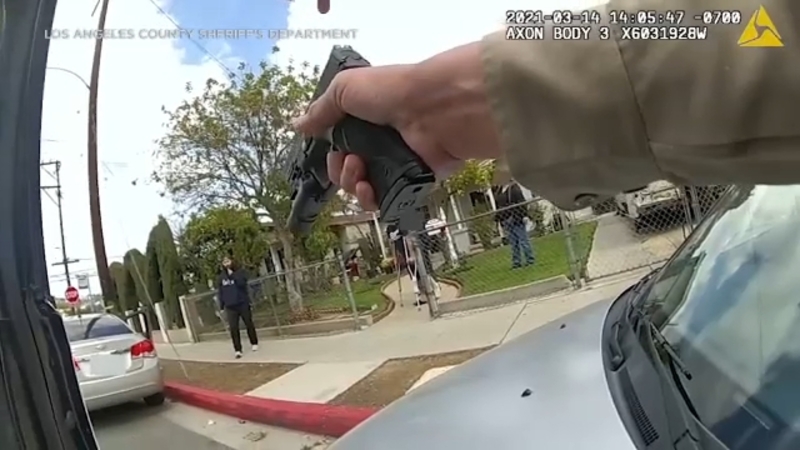 Villanueva: 'Grave concerns' over deadly shooting by deputies on video

EAST LOS ANGELES (KABC) -- Sheriff Alex Villanueva on Friday expressed "grave concerns'' about the shooting by deputies of a knife-wielding 34-year-old man in the midst of a mental health crisis, a killing that was captured on videotape and prompted a federal lawsuit from the man's family.

David Ordaz Jr. was shot and killed in East Los Angeles on the afternoon of March 14 after family members called for help during an incident in which the man was holding a kitchen knife.

In a statement, Villanueva wrote that deputies had responded to a call of a man with a knife "who was under the influence of drugs and wanted to commit 'suicide by cop.'''

Also Friday, the sheriff's department released footage from body-worn cameras showing several deputies shoot and kill Ordaz as family members stood in the front yard of their home a few feet away. Footage of the shooting taken by a pedestrian was previously posted on YouTube.

"I want to clearly state I have grave concerns regarding this deputy involved shooting,'' Villanueva wrote. "One of the deputies has been relieved of duty and their peace officer powers have been suspended, pending the outcome of this investigation.''

A man who was fatally shot by police in Hollywood last week was carrying a metallic butane lighter "with a pistol-like grip handle,'' LAPD said.

A federal civil rights lawsuit filed by the Ordaz family Thursday alleges that deputies used unjustifiable lethal force when they shot and killed Ordaz. After the filing, an LASD spokeswoman said the department would not comment on pending litigation.

Videotapes of the shooting show Ordaz initially being hit with non-lethal rounds. Deputies allege Ordaz lunged at them, prompting lethal force, according to the complaint for wrongful death and civil rights violations.

"In fact, the coroner's report shows that all of the bullets except two, struck him on the back and on the side and the final bullet as visualized in the video shows a helpless David Ordaz Jr. looking up from the pavement without any weapon, and the killing shot was fired into his chest,'' the lawsuit alleges.

Body camera footage indicates that at least 10 rounds were fired, including a single shot fired immediately after the flurry of gunfire had stopped and Ordaz was lying face up on the sidewalk, holding his shoulder.