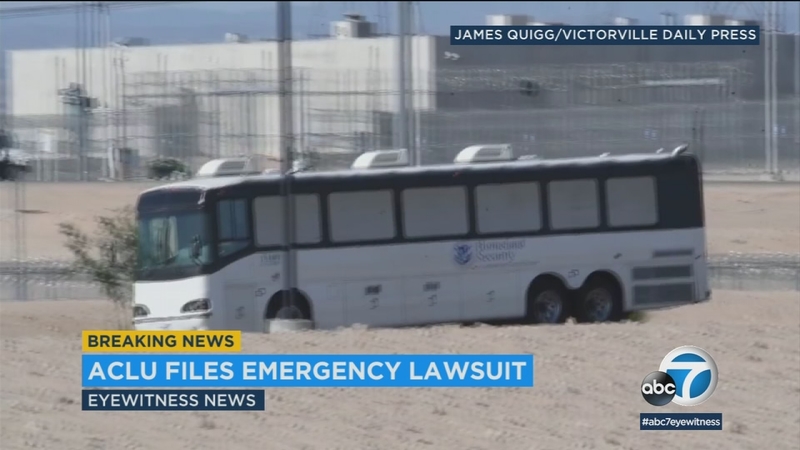 VICTORVILLE, Calif. (KABC) -- The American Civil Liberties Union has filed an emergency lawsuit to end what it says is the unconstitutional denial of attorney access to immigration detainees being held in a prison complex in Victorville.

Earlier this month, approximately 1,600 immigrant detainees were taken to the prison facility in San Bernardino County.

Immigration officials said the detained immigrants were transferred to prisons due to lack of space at detention centers. Authorities have said this was a temporary measure until they access more facilities or until illegal crossings decrease.

MORE: Immigrant detainees arrive at Victorville prison to be housed

In a news release about the emergency lawsuit, the ACLU said the detainees "have been denied all access to attorneys, including pro bono lawyers who wanted to give them legal advice on handling their cases that could be a matter of life and death."

The ACLU also said many of those being held include individuals detained under the Trump administration's "zero-tolerance" immigration policy, under which children have been forcibly removed from their parents.

The lawsuit was filed Tuesday night. The ACLU said that even attorneys who already had professional relationships with detainees before they were transferred to Victorville were cut off from their clients.

The organization also stated that volunteer lawyers who sought to hold "know your rights" sessions in the prison were likewise turned away. In addition, the detainees appear to have been allowed little or no communication with family members, the ACLU said.

The emergency lawsuit asks that officials be forced to drop all actions that prevent attorneys from visiting or communicating with immigration detainees at the Victorville prison, the ACLU said.