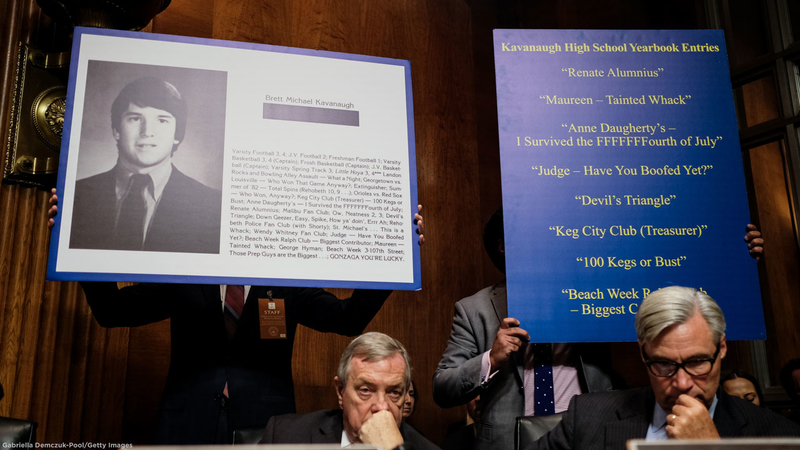 WASHINGTON -- In a heated exchange with Senator Sheldon Whitehouse, Supreme Court nominee Brett Kavanaugh dismissed the scrutiny of phrases in his high school yearbook as an "absurdity."

Democratic senators have been bringing up Kavanaugh's yearbook as they question him about Christine Blasey Ford's allegation of sexual assault when they were teens. Kavanaugh denies the allegation.

Though some had speculated that the phrase "devil's triangle" referred to a sexual act, Kavanaugh claimed it was a drinking game involving three glasses arranged in a triangle.

The phrase "FFFFFFFourth of July," also speculated to refer to sexual acts based on a tweet by attorney Michael Avenatti, was an inside joke over the way a classmate pronounced an expletive, Kavanaugh said.

"Judge -- have you boofed yet?" referred to passing gas, and "Beach Week Ralph Club" was a reference to vomiting, Kavanaugh said.

Kavanaugh also apologized to a high school acquaintance whose name was in a yearbook entry written by him and others with the word "alumnius" after, presumably a misspelling of "alumnus".

Kavanaugh called Renate Schroeder Dolphin "a good female friend" whom people in his social circle "would admire and went to dances with." He said the yearbook reference "was clumsily intended to show affection and that she was one of us."

He said the media has falsely interpreted the term "alumnus" as being related to sex. He said it was not, adding that he and Dolphin "never had any sexual interaction at all."

According to reports, Dolphin had initially been one of 65 women to endorse Kavanaugh after the sexual assault allegations came to light from Christine Blasey Ford. Dolphin withdrew her endorsement after Ford's accusation came to light.