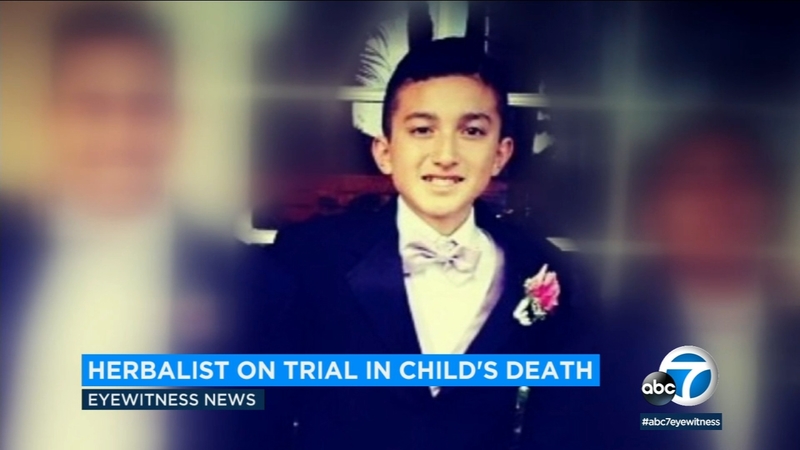 By Sunday morning, Edgar wasn't moving, his eyes were fixed in place, his skin was cold and he was barely breathing.

Edgar's father broke down sobbing at times on the witness stand Wednesday as he recounted the heartbreaking final days of his youngest son.

"He was a very playful child, very smart, very loving, sweet to us and others," said Edgar's father Delfino Lopez Solis.

Edgar's August 2014 death is the focus of the trial of self-described "Master Herbalist" Tim Morrow.

Morrow, 84, is charged with child abuse resulting in death and practicing medicine without a license.

Morrow has pleaded not guilty to the two misdemeanor charges. If he's found guilty, he could face up to two years in prison.

Morrow is accused of convincing Edgar's family to treat the boy's Type 1 diabetes with herbs purchased from his shop instead of the insulin prescribed by Edgar's physician.

Solis told jurors that his wife, Maria, summoned Morrow to their Harbor Gateway home the Friday morning before his death.

Through an interpreter, Solis explained why they did not take Edgar to the hospital as his condition rapidly deteriorated over those two days.

"He (Morrow) told us that if we took the child to the hospital, he would get killed there, Solis said. "That the method they used at the hospital, particularly the insulin, was poison."

Morrow also claims to be a "Master Iridologist" and Solis testified that Morrow told them he could diagnose Edgar by peering at his irises.

Iridology is a technique that proponents claim can evaluate a person's health by examining the patterns, colors and other characteristics of the iris. Science-Based Medicine refers to iridology as a "pseudoscience" that "should be looked upon with suspicion."

Solis says he believed Morrow was a medical doctor and that his wife had been taking Edgar to see Morrow for herbal treatments. In the last two days of the seventh-grader's life, Morrow came to the family's home three times to see the sick child.

Each time he allegedly gave the same advice - do not take Edgar to the hospital. He prescribed herbs and reflexology.

"He was fine, but that he had to help him release the toxins from his body," Solis said of Morrow's diagnosis.

On Sunday morning, Edgar was no longer breathing. A family member initially called Morrow instead of 911.

"He was saying something like open the windows, so the air and light would come in," Solis said of Morrow's advice.

Why not call the hospital or 911 immediately, asked Deputy City Attorney Heidi Matz.

"Because we had been brainwashed, that they would kill or hurt our son at the hospital," Solis testified.

The defense maintains that Morrow never said he was a doctor and that Edgar's mother had a preference for herbal treatments long before she ever met or consulted with Morrow.

Edgar's mother stopped giving the boy insulin in early January 2014 because his blood sugars had returned to a normal range.

The defense pointed out that Edgar's pediatric endocrinologist, a specialist in diabetes, told the parents that Edgar was in what's known as a "honeymoon period" - meaning that he might not need insulin for a period of time.

"You knew that Edgar was in a honeymoon period and that the symptoms were going to come back," asked defense attorney Sanford Perliss.

The summer of his death, Edgar went away to a camp in Indiana for nearly one month. Before he left, he appeared to be healthy according to Solis.

"And when he went to camp, did you and your wife send him with insulin," asked Perliss.

"No insulin, but he was taking instructions regarding the herbs," Solis said.

Matz asked Solis if Morrow ever expressed his condolences over Edgar's death.

"Did the defendant ever call you on that Sunday or any time after that?" Matz asked.