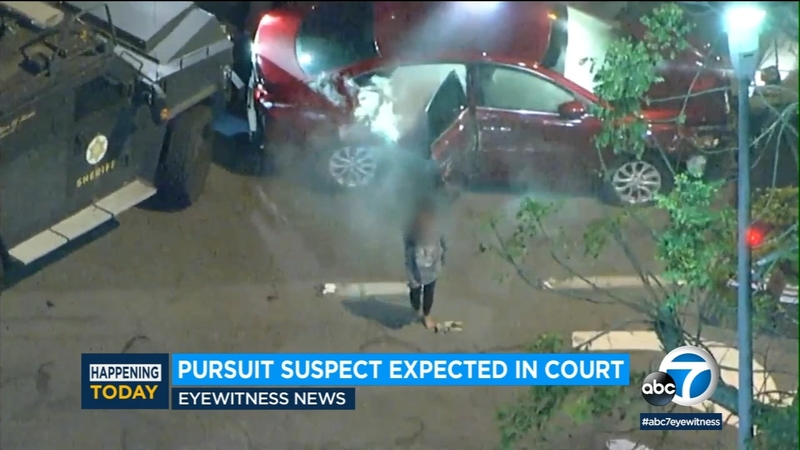 Woman in reckless SoCal chase to appear in court

LOS ANGELES (KABC) -- A woman who led authorities on a reckless chase through the San Gabriel Valley while her 9-year-old daughter was in the vehicle is now facing multiple charges, prosecutors announced Thursday.

Margaret Hassan, 30, has been charged with one count each of child abuse under circumstances likely to cause great bodily injury or death, assault with a deadly weapon and fleeing from police while driving, according to the Los Angeles County District Attorney's office. She is also facing seven counts of hit-and-run resulting in property damage.

During Tuesday's chase, Hassan weaved dangerously through traffic, ignored red lights and crashed into multiple cars before coming to a stop. The situation then evolved into a standoff that lasted for more than three hours in Diamond Bar.

During the standoff, authorities used a drone to try to see inside the vehicle. Authorities say Hassan repeatedly told deputies she was alone. Cpt. Joseph Williams noted that the car was cluttered with clothing, debris and trash.

They only saw Hassan in the car, leading them to believe the girl was possibly in the trunk.

Authorities eventually deployed tear gas and the girl emerged from the gas-filled car.

A standoff in Diamond Bar ended with a woman being taken into custody after deputies injected tear gas into the vehicle. A 9-year-old girl also emerged from the backseat as the standoff ended.

"Seeing her exit that car I just wanted to go over and physically take hold of her, let her know it's OK," Edwards said.

Had they known the child was inside, different measures would have been taken, Williams said.

Investigators say Hassan may have mental health issues that could have contributed to the wild and violent pursuit.

The 9-year-old girl was not hurt and she is now in the custody of Child Protective Services.