The US Marine's family hasn't been able to hold a burial service or a memorial because of the COVID-19 outbreak.
KABC
By Amy Powell 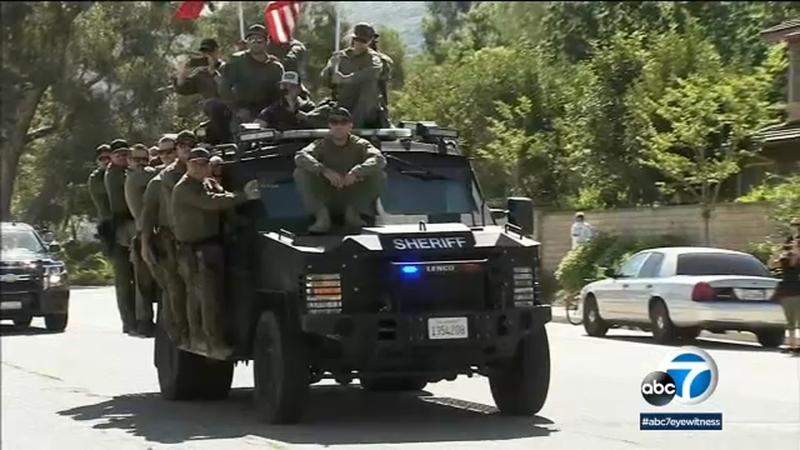 SIMI VALLEY, Calif. (KABC) -- The expressions on their faces summed up the emotions the grieving parents of Gunnery Sgt. Diego Pongo were feeling as they watched a surprise car parade in their Simi Valley neighborhood.

The 34-year-old U.S. Marine was killed last month during a fire fight in Iraq.

Diego's family hasn't been able to hold a burial service or a memorial because of the COVID-19 outbreak.

"As much loss as this has been to us with Diego's death March 8, we've also had an overwhelming amount of community support," said Steffen.

Diego's sister-in-law Andrea Pongo reached out to the Simi Valley Police Department, city officials and members of the military to organize the tribute.

"We've been really alone through this time and it's been hard," said Andrea.

"It's been really hard, especially knowing that we haven't been able to hold a funeral or any kind of memorial, and people keep reaching out to us, showing us their support and saying how much they want to be there for us," said Diego's brother Andres Pongo.

The family cherished the special moment with soldiers folding a flag and presenting it to Diego's father.

Diego Pongo will be buried at Arlington National Cemetery. His funeral and memorial are expected to be held in a few months.
EMBED More News Videos

One of two United States Marines killed during a combat operation in Iraq over the weekend has been identified as a Simi Valley man, federal authorities announced Tuesday.