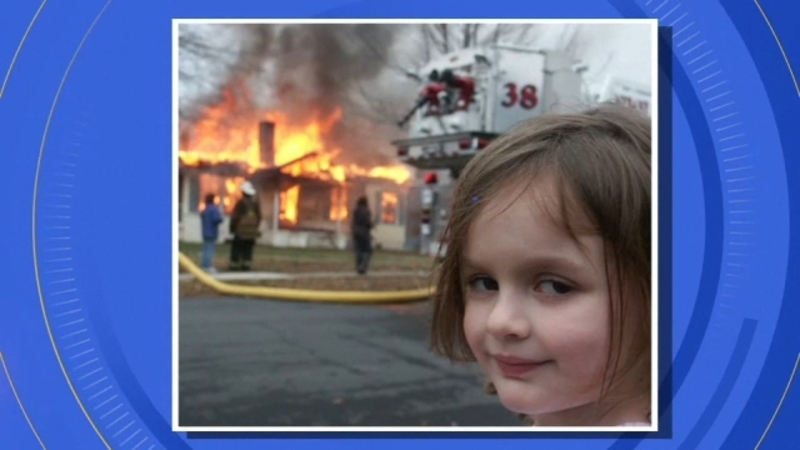 CHAPEL HILL, N.C. -- A college student is half a million dollars richer after selling a photo of her 4-year-old self in an online auction.

Zoe Roth is a 21-year-old senior at the University of North Carolina at Chapel Hill, according to The News & Observer. But she's also the face behind one of the internet's most enduring memes: Disaster Girl.

At the age of 4, her father took a now-famous picture of her grinning at the camera with a house burning in the background.

That house was set ablaze as part of a training exercise for the local fire department, but the picture without context spawned countless dark captions and birthed the title disaster girl, according to The News & Observer.

But until now, internet-famous people didn't really have a way to cash in on their notoriety.

Enter NFTs -- or non-fungible tokens -- part of the new craze to own digital assets such as music, photos, or in this case, memes. They're created via blockchain, like cryptocurrency. "Non-fungible" essentially means one-of-a-kind, something that can't be replaced, unlike, for example, a dollar bill that you can replace with any other dollar bill.

"There's just such a bubble with NFTS, and a lot of what people are buying is this sort of Internet ephemera and they're buying into nostalgia," Taylor Lorenz, a New York Times technology reporter, told "Good Morning America."

Roth and her dad went through the process of getting the picture ready to be auctioned as an NFT.

When the auction finished, the picture from 2005 sold for the equivalent of nearly $500,000 US dollars.

Roth told The News & Observer she plans to use the money to pay off her college loans and donate to some charities.

In March, the band Kings of Leon released its eighth studio album, "When You See Yourself" as an NFT, offering concert tickets along with some packages.

"Disaster Girl" is one of many internet memes being sold for thousands.

Others, like the man behind the viral Fyre Festival dinner photo, are trying to auction off their images. Trevor DeHaas is hoping to collect upwards of $80,000 for a kidney transplant and his daily dialysis, according to Axios.

The dinner that @fyrefestival promised us was catered by Steven Starr is literally bread, cheese, and salad with dressing. #fyrefestival pic.twitter.com/I8d0UlSNbd