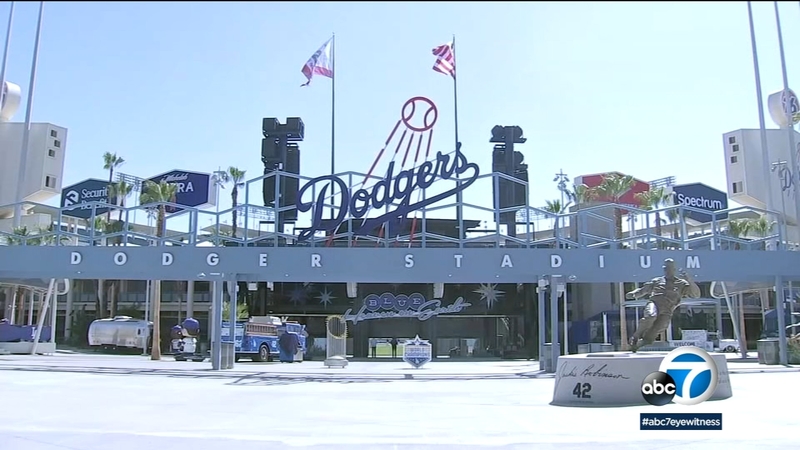 LOS ANGELES (KABC) -- If you're one of those Dodger fans who doesn't like being pinned to your seat for nine innings, boy are you going to love the $100 million worth of changes to the stadium.

And you'll want to walk to the brand-new two-and-a-half-acre center-field plaza - the front door to Dodger Stadium which used to be a parking lot.

New concessions like Shake Shack and Dunkin' Donuts have set up shop and the Gold Glove bar will house the 2020 World Series trophy. There's memorabilia on loan from Tommy Lasorda's family and his bobblehead is located in blue heaven on earth.

Some of the 15,000 fans who will be inside Dodger Stadium for the first home game will be sitting in the new Home Run Seats. They greatly increase your chances of going home with a home run ball.

"It was a really amazing emotional time for a lot of people in our city and I think the connections people have to Dodger Stadium. They were able to live those through a cardboard cutout which we would have never imagined, but that's the way the pandemic swung," said Nichol Whiteman, CEO of the Los Angeles Dodgers Foundation.

The Dodgers didn't sit back during the pandemic, but instead helped the city recover while winning a World Series.

"It's why we became the largest COVID testing center in the world," Kasten said. "It's why we opened it up to voting. It's why we are now California's biggest vaccine center."

"It's what we do. We owe it to our fans who have supported us for as long as they have and as well as they have and we know they're going to be back continuing to do what they have for 60 years."
Report a correction or typo
Related topics:
sportslos angeleslos angeles countymlbbaseballlos angeles dodgers
Copyright © 2022 KABC Television, LLC. All rights reserved.
TOP STORIES
LA County appears to have passed peak of omicron surge, officials say
Woman who molested 10-year-old as teen sentenced to juvenile facility
10 injured when bridge collapses in PA; human chain formed to help
Full closure of WB 91 Freeway in Corona rescheduled for this weekend
Child vaccine rates alarmingly low as doctors contend with COVID surge
Assistant fire chief arrested for allegedly impersonating officer
Police capture murder suspect after large-scale search in NoHo
Show More
Reparations are for descendants of Black slaves: California official
Rapper Drakeo the Ruler's family announces wrongful death lawsuit
Rams host NFC Championship ahead of Super Bowl
Suspect abandons SUV in downtown LA after high-speed chase
Holocaust book 'Maus' banned in Tennessee school district
More TOP STORIES News