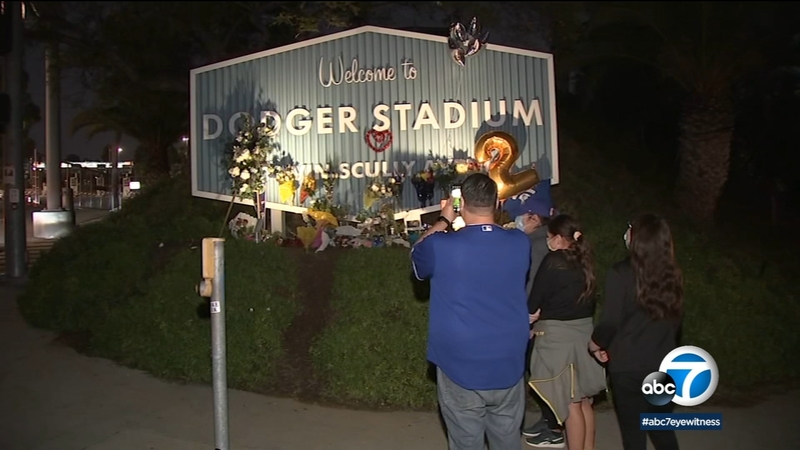 ELYSIAN PARK, LOS ANGELES (KABC) -- Dodger fans continue to mourn the loss of the man who led the franchise to a pair of World Series titles and Team USA to Olympic gold in 2000.

Tommy Lasorda passed away Thursday at 93.

Heartbroken fans continue to gather at Dodger Stadium, adding flowers and tributes to a growing memorial in Lasorda's honor.

"We made this board up there in honor of Tommy Lasorda," said Dodger fan Lydia Duran. "My husband and us - we're big fans, huge fans."

The 93-year-old left a lasting legacy. He led the Dodgers to two World Series championships during his 20-year career as manager, but it was his dedication to the sport and the team he loved that was unmatched.

"The heart of baseball. You see Tommy Lasorda and you expect him at a game. ... When you talk about the Dodger organization, it's him," Dodgers fan Susan Lopez said,

Out on centerfield Lasorda's number two now fills the grass. Fans are flocking to buy his jersey. Lasorda's name is synonymous with his treasured team.

Those turning out at the stadium say the eternally optimistic Hall of Famer known for his welcoming spirit is the reason so many bleed blue.

"We wanted to pay our respects and show Tommy wasn't just baseball. He was more than baseball. Lot of people say he was a national treasure," Santos Duran of Arleta said.