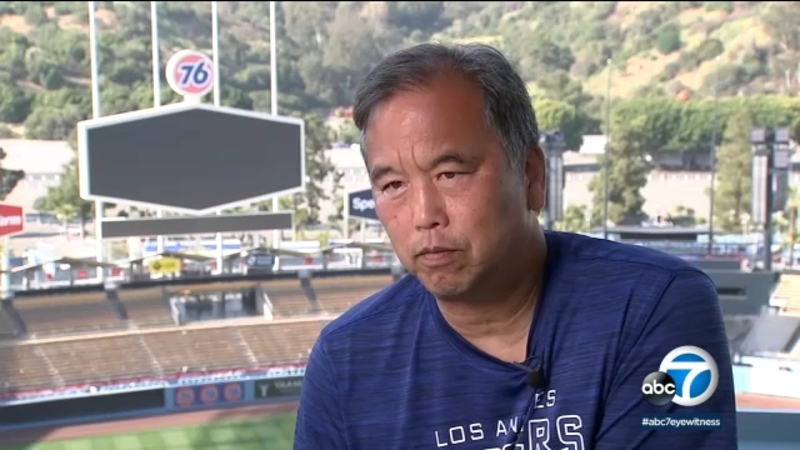 Dodgers photographer has captured some of the team's iconic moments

LOS ANGELES (KABC) -- Over the course of nearly four decades, Dodgers photographer Jon SooHoo has captured some of the most iconic moments in the team's history.

The Dodgers roster has changed over the years, but SooHoo is a constant with the team, chronicling season after season along with major sporting events in Southern California and across the U.S.

"I was born right over here at White Memorial (hospital) in East L.A. and I lived in Silver Lake all my life," SooHoo said in an interview with ABC7 at Dodger Stadium. "My dad's a graduate of USC. He and my mom would take me to USC football games."

SooHoo, a fifth-generation Chinese-American, seemed destined to be a sports photographer.

Restaurateur credits his perseverance and success to lessons from his father, a Hiroshima survivor
EMBED More News Videos

Gerald Tanaka has been in the restaurant business for over four decades. He credits his success to the life lessons from his father.

SooHoo's love for photography began when he was a student at his dad's alma mater, USC.

He recalled his first game as a photographer for the Daily Trojan: "Walking down that big tunnel. There's nothing more awesome than going down that Coliseum tunnel from the street. It was just phenomenal."

SooHoo has turned his passion with the camera into a very accomplished career. He's been documenting one of the most historic sports franchises, through the lens, for the past 37 years.

"To know that I've lasted through the generations of ownerships and PR persons, GMs, the players -- it's incredible," he said.

Over the years, he's photographed "phenomenal" moments like Kirk Gibson's legendary home run in the 1988 World Series, a 2008 exhibition game against the Red Sox at the Coliseum.

"That was one of the most tremendous events I've been to," he said.

But the Dodgers aren't the only team SooHoo has captured.

"I was also shooting the L.A. Raiders, Anaheim Rams -- even back to the USFL when Steve Young played quarterback for the L.A. Express," he said. "My library's pretty deep."