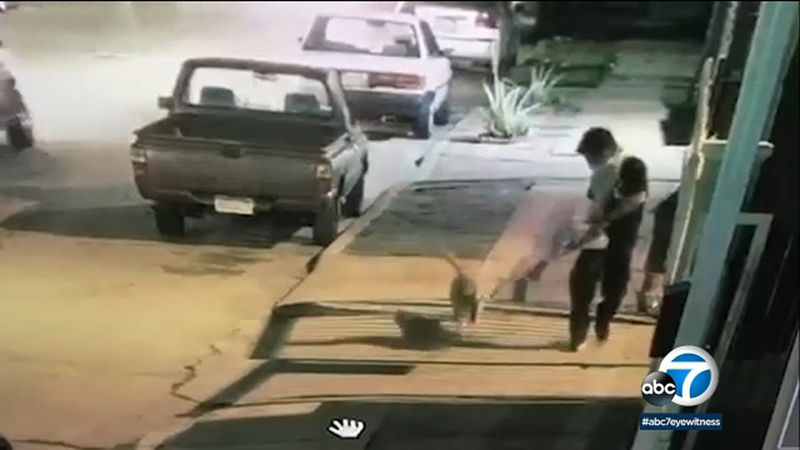 SOUTH LOS ANGELES (KABC) -- A South Los Angeles man has been arrested after a shocking act of animal cruelty - burning a dog alive - was partially caught on camera.

Surveillance video shows the suspect on the night of Aug. 22 walking down the sidewalk with a small corgi.

He crosses the intersection of 88th and San Pedro streets and then disappears from view.

Moments later, there appears to be an eruption of flames and then the man is seen walking back, but there's no sign of the dog.

The Los Angeles Police Department later said the suspect, identified as 24-year-old Brandon J. Smith of South LA, set the dog on fire. He was arrested on Sept. 4 on a felony animal cruelty charge.

Serena Prentice, who is Smith's ex-girlfriend, said she was horrified by the act.

"Just to be burned alive is honestly disgusting," she said.

Prentice has video of the seven-year old corgi named Hennessy playing with her son.

"Disgust honestly. I was super disgusted in him, angry," she said.

Hillary Rosen, founder of the animal-rescue group A Purposeful Rescue, said the dog was kept at the shelter for two days before being taken to the animal hospital. Hennessy later died from the injuries.

Prentice says her ex-boyfriend is a drug user and suffers mental illness. She feared something like this might happen.

"In August I noticed he was setting things on fire. He would post it on Instagram live of him setting birds on fire."

Rosen says that may be a sign he is capable of greater violence.