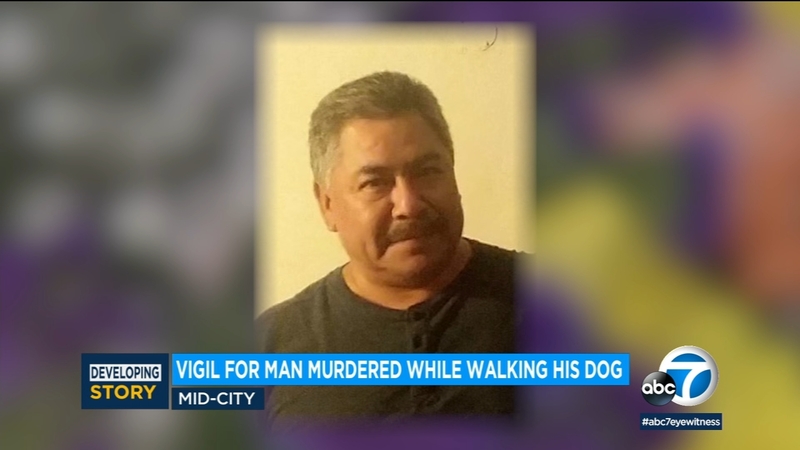 MID-CITY, LOS ANGELES (KABC) -- A candlelight vigil was held Monday night in honor of a 52-year-old man who killed while walking his dog in a Mid-City neighborhood.

Marcos Sandoval, 52, was fatally shot about 5 a.m. Saturday near the intersection of Genesee Avenue and Saturn Street, prompting a search for the shooter, the Los Angeles Police Department said.

His wife, daughters and other family members attended Monday's memorial and expressed gratitude for the community's support.

"It means a lot," said Andrea Sandoval, the victim's daughter. "There's still people out there that have a heart"

Sandoval's family said he made his living as a painter, and described him as a hardworking, friendly man who had no enemies.

"Right now the whole family is heartbroken and I really, really appreciate that you guys are supporting them, I really do," said Leydi Gonzalez, a family friend.

Sandoval was walking his dog early Saturday morning when he was confronted. Video from a nearby home's surveillance camera shows a dark-colored car driving along the street and stopping.
EMBED More News Videos

A 52-year-old man was shot and killed while walking his dog in Mid-City, prompting a search for the shooter.

Police say the gunman got out of the vehicle, exchanged words with Sandoval and then opened fire, killing him. Sandoval's dog can be seen running away.

"It makes you scared to leave your own house in your neighborhood," said neighbor Vetra Waddles "This neighborhood is so quiet. I never heard nothing bad about it."

Anyone with information about the shooting is urged to contact West Bureau Homicide detectives at (213) 382-9470.

A GoFundMe page has been created to help cover the costs of transporting Sandoval's body to Mexico for burial.