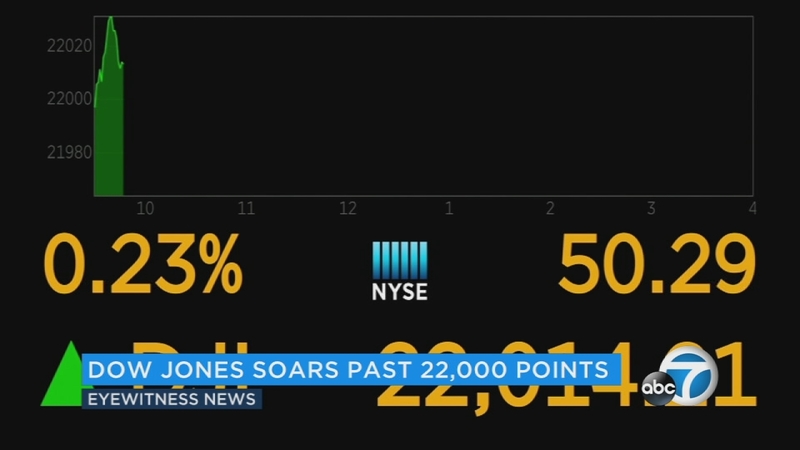 NEW YORK -- You could say the Dow cruised to 22,000: The blue chip index rose to its latest milestone without much excitement or drama as aerospace giant Boeing and a few other companies did most of the work.

Stocks have spent the last five months gradually moving higher, without many big gains or losses. They've drawn strength from rising U.S. corporate profits and continued growth in the economy, along with recoveries in Europe and other regions. And investors still believe that if the global economy or the market ran into serious trouble, central banks would step in to help, as they did after the 2008-09 global crisis. That's created a very calm stock market.

Given the peace and quiet in the markets, it's fitting that a small move - 52 points, all of them essentially from Apple - brought the Dow to its newest milestone.

How did we get here?

Boeing, McDonald's and health insurer UnitedHealth have contributed more than 700 points out of the 1,000 the Dow has gained since March 1, when the index topped 21,000 points for the first time. Strong earnings have helped all three companies, with Boeing making huge gains after its second-quarter report in late July. It's had a far better year than any other Dow component, and is now the highest-priced stock on the index.

Meanwhile Goldman Sachs and IBM, which helped lead the Dow's surge in late 2016 and early 2017, have come crashing back to earth. They're the worst performers on the index this year.

The Dow? Is that still a thing?

Charles Dow's index is more than 120 years old, and experts and market-watchers constantly debate how well it represents the market.

With only 30 companies, the Dow reflects much less of the economy than the Standard & Poor's 500 index or the Russell 1500, which professionals pay more attention to. And while this is more technical, Dow points are based on dollars of stock price instead of the relative sizes of companies. So a 1-percent move for an expensive stock like Boeing or Goldman Sachs, both priced well above $200 per share, will move the Dow more than Microsoft, worth around $70 per share, or General Electric, at $25 per share, even though investors value Microsoft at more than $550 billion to about $90 billion for Goldman.

Do I need a thermometer to tell me it's warm?

The Dow is famous enough to be recognized by a lot of people, and that's a kind of relevance. And for all the arguments about the most precise market indicators, the Dow and S&P 500 have performed about the same this year. As of Wednesday, the Dow is up 11.4 percent for the year and the S&P 500 is up 10.7 percent.

Kate Warne, an investment strategist for Edward Jones, compares the Dow to the weather forecast taken at a local airport: It doesn't tell you the exact temperature at your house, but it gives you a general idea of what the weather is.