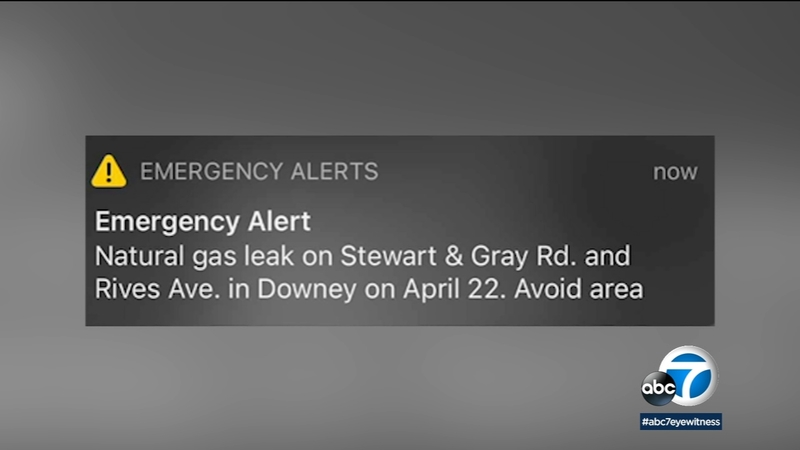 DOWNEY, Calif. (KABC) -- A gas leak in Downey on Thursday prompted evacuations and an emergency notification that was unintentionally sent to smartphones and mobile devices far beyond the immediate area.

A damaged gas line was reported at 10:30 a.m. in the 7800 block of Stewart & Gray Road, and was apparently caused by a third-party contractor that was working in the area, according to the Southern California Gas Company. All residents within a 300 foot radius were evacuated as a precaution.

There were no immediate reports of damage or an explosion, the Downey Fire Department said.

The emergency alert, which was sent to cellphones shortly after 12:30 p.m., included only the location of the scene and a warning to avoid the area.

Much like an Amber Alert, the message about the gas leak caused cellphones throughout the region to vibrate and beep -- and led to a flood of calls to authorities.

City of Downey officials later apologized, saying "The notification was only intended for near-by residents in the area, not the entire County."

In the aftermath of the deadly explosion at an Ontario home, San Bernardino County fire officials and law enforcement unveiled a new system to report illegal fireworks.

Video from AIR7 HD showed firefighters and utility crews working to repair the ruptured line, while a stream of water from a firehose prevented any possible flames from igniting.

By around 3:30 p.m., the Downey Fire Department reported the gas company was estimating about four hours to repair the 6-inch line.

The Gas Company reminded residents and business owners to call 811 before digging in a garden or at a construction site. "Calling 811 will avoid possible injury or damage to hidden utility lines," the utility said.