An explosion at a hash oil manufacturer in downtown Los Angeles that sent firefighters running for their lives over the weekend is shifting toward a potential criminal probe, investigators say.
KABC
By Marc Cota-Robles 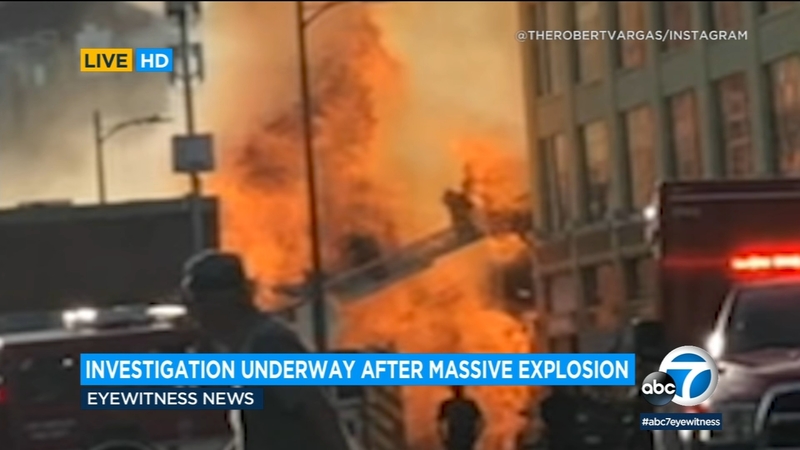 LOS ANGELES (KABC) -- An investigation is underway to determine if criminal conduct was involved in a fiery explosion in downtown Los Angeles over the weekend that injured a dozen firefighters and damaged buildings and fire equipment.

Detectives from the Los Angeles Police Department and the city's fire department are working with the federal Bureau of Alcohol, Tobacco, Firearms and Explosives to determine what might have sparked the blast that shot a ball of flames out of the building Saturday night and scorched a fire truck across the street.

"The National Response Team ... along with ATF special agents from the Los Angeles Field Division, were activated today to join the investigation
of the fire,'' the ATF said in a statement released Monday. "The NRT callout will have experts arriving today and they will begin processing the scene.''

The NRT was activated at the request of the Los Angeles city officials, according to ATF.

"ATF is committed to working alongside Los Angeles Fire Department to determine the origin and cause of this fire that tragically injured firefighters,'' said Monique Villegas, special agent in charge of ATF's Los Angeles Field Division "ATF will provide whatever resources are necessary to thoroughly investigate and provide answers.''

Though the cause has not yet been determined, fire officials said the blaze began at the site of a butane honey oil supplier, Smoke Tokes Warehouse Distributor. Chief Ralph Terrazas said an on-scene investigation has to be completed, which will take several days.

The building was full of highly flammable butane canisters, but officials say there were no signs on the building warning of the danger inside.

Video captured firefighters on the roof scrambling down ladders with their protective coats on fire. The wall of flames shot out the building and burned seats inside a fire truck across the street.

"You see 'em crawling through a fire ball and it's gut-wrenching to watch. But they kept their wits about them, and they did what they were trained to do. You can just imagine the heat, the temperature of what they're experiencing, the amount of pain they're probably going through in that moment," Los Angeles Fire spokesperson David Ortiz said. "That's something that's gonna take its toll and it's something that you carry with you into your retirement and it stays with you the rest of your life."

There was light to moderate smoke when firefighters entered the one-story building in the city's Toy District and went on the roof - normal procedures to try to quickly knock down any flames.

Terrazas said one of the firefighters inside the building thought things didn't seem right - the pressure from the smoke and heat coming from the rear of the building were increasing. He directed everyone to get out, and they quickly started exiting the building as it was rocked by the explosion.

"When something out of the ordinary starts to happen, they were describing a loud, rumbling dead engine sound, the hair on the back of your neck starts to stand up and you say, well if something doesn't feel right, it's time to bail out," Ortiz said. "Right as they were bailing out, that's when the fireball engulfed the firefighters."

The blast injured a dozen firefighters. Some of them who ran out onto sidewalks, where they tore off their burning protective equipment, including melted helmets, officials said.

"Everybody off the roof!" a firefighter shouted in scanner traffic captured on Broadcastify.com.

Firefighters first thought they were battling a routine structure fire, city fire Capt. Erik Scott told KNX Radio, but as they got a little farther in the building they started to hear "a loud hissing sound and a significant rumbling that you could feel vibrating throughout the area."

He said "one significant explosion" shook the neighborhood around 6:30 p.m. Firefighters inside had to run through a wall of flames he estimated as 30 feet high and wide, and those on the roof scrambled down a ladder that was engulfed in flames.

Three firefighters were released after spending the night in the hospital, fire department spokesman Nicholas Prange said Sunday. Of the eight who remained hospitalized, two were in critical but stable condition, he said. Officials initially announced that 11 firefighters were injured. But Prange said a 12th was treated and released for a minor injury.

All were expected to survive.

Two firefighters who suffered the most severe burns have made major progress, both being removed from the ventilators they were using and are breathing on their own as of Monday morning.

More than 200 firefighters rushed to the scene, and dozens of engines, trucks and rescue vehicles clogged the streets. The fire spread to several nearby buildings, but firefighters were able to douse it in about an hour.

The site of the fire

Scott said the building was a warehouse for SmokeTokes, which he described as a supplier for makers of butane honey oil. Butane is an odorless gas that easily ignites, and it's used in the process to extract the high-inducing chemical THC from cannabis to create a highly potent concentrate also known as hash oil. The oil is used in vape pens, edibles, waxes and other products.

The Associated Press' call to SmokeTokes went unanswered on Sunday, and the company's voicemail was full.

On its website, SmokeTokes advertises a variety of products including "puff bars," pipes, "dab" tools, vaporizers, "torches and butane," and cartridges. The company says it is "an international distributor and wholesaler of smoking and vaping products, and related accessories."

Prange, the LAFD spokesman, said carbon dioxide was also found with the butane canisters inside the building but that it was still not clear what caused the blast.

Adam Spiker, executive director of the cannabis industry group Southern California Coalition, said he didn't know what activities were taking place inside the building. However, if the business was using butane in cannabis extraction it would be illegal because the city has never issued a license for that type of operation.

Because of safety concerns, such businesses are typically restricted to industrial areas and kept away from urban centers.

"If they were doing volatile extraction with butane ... they couldn't be legal in the city of LA to do those types of activities," Spiker said.

He said the coalition was unaware of the business having any type of license and "something about this doesn't pass the smell test."

Information so far "puts up a lot of alarm bells," Spiker said.

In 2016, there was another major fire at a business called Smoke Tokes at a nearby address. The Los Angeles Times reported at the time that it took more than 160 firefighters to put out the blaze and that they encountered pressurized gas cylinders that exploded in the fire.

It was unclear whether that business and the one that burned Saturday were connected.

San Pedro Street between 3rd and 4th streets remains shut down, and a portion of Boyd Street will remain closed through the duration of the investigation.