Urban gardening on the rise atop downtown Los Angeles skyscrapers 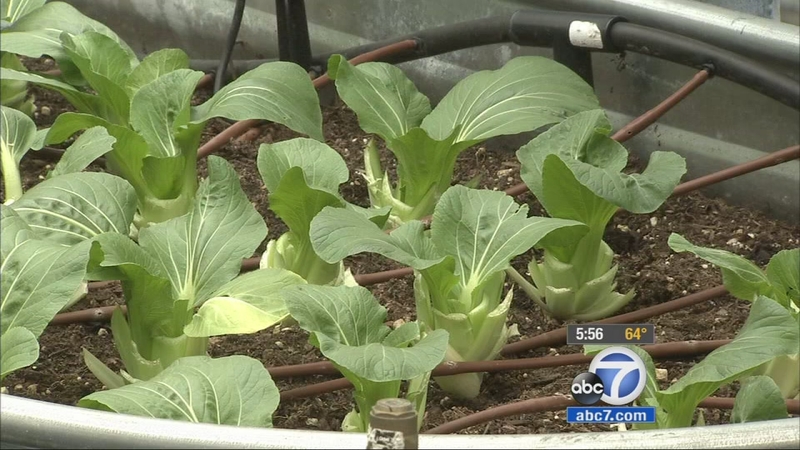 Urban gardening on the rise atop DTLA skyscrapers

DOWNTOWN LOS ANGELES (KABC) -- The towers of glass, steel and concrete that rise above downtown Los Angeles might not seem like the most logical place to farm for food, but think again. Urban gardening is a growing trend.

Farmscape is a local company that specializes in building urban gardens. Company rep Dan Allen says L.A.'s high-rise rooftops are actually an ideal place for herbs, vegetables and even fruit trees. He says downtown's housing boom has resulted in a big increase in urban gardeners.

"We have a year-round growing climate and we have a history as the country's largest agricultural producer. I think we'll see more of it in coming years," Allen said.

Allen helped build a rooftop garden on what was a paddle tennis court atop the Jonathan Club on 6th and Figueroa streets.

"It's about 50 steel tanks. We filled them with organic soil and we're growing fresh ingredients for their on-site restaurant," Allen described.

The garden was the centerpiece of an informational tour Tuesday touting the benefits of urban gardens.

"It's an increase in the lifespan of the roof. It also creates a new revenue stream for a space that otherwise is just sitting here," said Jason Reed with Seedstock.

Proponents of these urban rooftop gardens say downtown L.A. is a perfect location because it has so many rooftops. But more importantly, they say more and more people want to feel connected to the food they eat.

Jason McClain, the executive chef at the Jonathan club, says it's all about the quality.

"When I cut an heirloom tomato at 5 o'clock and I serve it at 6 o'clock, I know there is no better tomato salad in the city than the one I just made," McClain.

Other downtown restaurants are doing the same thing, even when the roof isn't available. A small garden at Artisan House provides the kitchen and bar with fresh herbs.