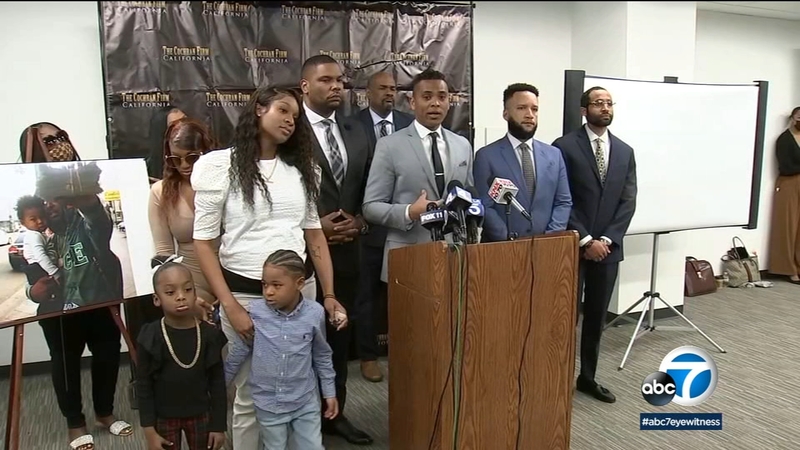 LOS ANGELES (KABC) -- The family of rapper Drakeo the Ruler announced Thursday it will file a wrongful death lawsuit against the promoters of the Los Angeles music festival where he was fatally stabbed backstage.

The 28-year-old rapper, whose given name is Darrell Caldwell, was stabbed to death during a brawl backstage at the Once Upon a Time in L.A. festival held at the Banc of California Stadium in Exposition Park Dec. 18.

Attorneys for the family of the slain rapper provided video of the melee that they say was taken around the time Caldwell was stabbed in the neck. He later died at a hospital, and no arrest has been made in the case.

Video played at the news conference of the moments leading up to the stabbing, which his attorneys called a "targeted assassination," showed men in red pouring into the fenced-off backstage area and attacking Caldwell and his small entourage. No security guards or police officers can be seen.

RELATED: Rapper Drakeo the Ruler dies after being stabbed at Once Upon a Time in L.A. concert
EMBED More News Videos

Los Angeles rapper Drakeo the Ruler has died after he was stabbed Saturday night at a music show at Exposition Park, according to reports.

The attorneys say the lack of security backstage led to the fight and the rapper's murder.

The family is suing the promoters, which includes Live Nation, for $20 million.

"Mr. Caldwell was lynched by 40 to 60 people," said attorney James Bryant. "This would never have happened if those promoters had the proper security protocol. The world lost an amazing artist, a beautiful human being, a father."

A request for comment from the promoters, including Live Nation, Bobby Dee Presents and C3 Presents, was not immediately returned.

Organizers of the music festival provided the following statement: "Once Upon a Time in LA joins Drakeo's family, friends, and fans in grieving his loss. The festival is continuing to support local authorities in their investigation as they pursue the facts."

The lawyers also discussed a possible motive for the stabbing, pointing out that Caldwell was found not guilty in a murder and attempted murder case involving gang members. Since that 2019 acquittal, they say there have been threats made against the rapper's life.

"Even where a person is proven innocent, he's exonerated, there is fallout from that and that was known to all of the promoters," attorney Kellen Davis said.

The attorneys said that on Monday they will file a wrongful death and negligence lawsuit against the festival's promoters.

Live Nation was also a promoter of November's Astroworld music festival in Houston, at which 10 people were killed and hundreds injured when a large crowd surged during a performance by the rapper Travis Scott.