At times, the dog tries to escape the beating, but that's when the man grabs him and punches him again.
KABC
By Carlos Granda 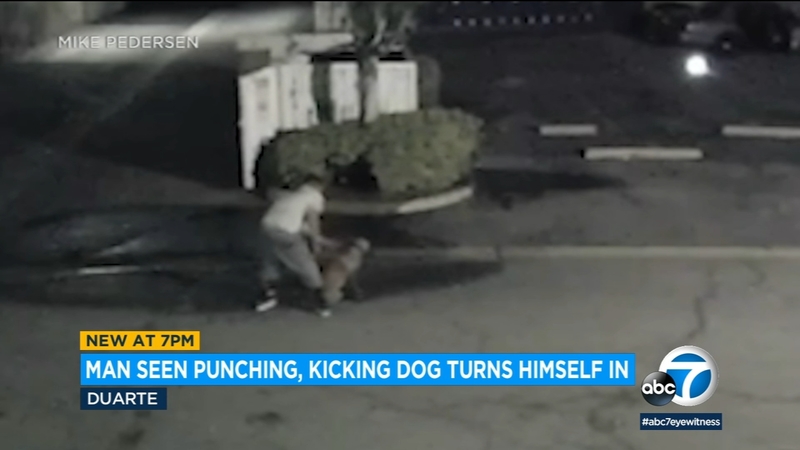 DUARTE, Calif. (KABC) -- A man caught on video hitting and kicking a dog repeatedly in Duarte turned himself in to authorities on Friday.

The dog was taken to the San Gabriel Valley Humane Society for a medical exam, according to the Los Angeles County Sheriff's Department.

The man will be detained until investigators get the results of that medical exam.

It happened in an isolated warehouse area in the 1500 block of Highland Avenue in Duarte. Residents tell ABC7 it happened in an empty parking lot of an industrial building near Evergreen Street and Santo Domingo Avenue.

The buildings are typically always closed and empty at night.

The man is seen punching and slapping the dog numerous times.

The video also shows the man yanking the dog by its collar as the dog remains unable to get away.

At times, the dog tries to escape the beating, but that's when the man grabs him and punches him again.

"It was just deplorable and actually quite horrific," said a Monrovia resident who identified herself to Eyewitness Witness only as Gina. "How can a human being do this to a dog? lt was unbelievable. It was an isolated lot and it was around 9 p.m. at night, but the act of beating took place and went on for 15 minutes in the video."

Steve, who also is from Monrovia and did not want to disclose his last name, was almost in tears talking about the incident.

"It's very horrible," he said. "We need to evolve spiritual life on this planet. We need to realize that we're all related, well cousins, to all the species and the other humans."

After about 15 minutes, the suspect is then seen putting the dog in a car and driving away.

It appears the suspect may not have known there were cameras that caught the attack.

This surveillance video was posted on the local Nextdoor app and reported to sheriff's department.

Residents who are seeing the video said they want the man arrested.

"The community is outraged, and they all want to go in and help and find this suspect," said Gina.

Investigators are investigating the incident.

The penalty for a misdemeanor case of animal cruelty can include up to one year in jail and a fine up to $20,000.