In total, about eight waterfowl have been killed in recent weeks.
KABC
By David González 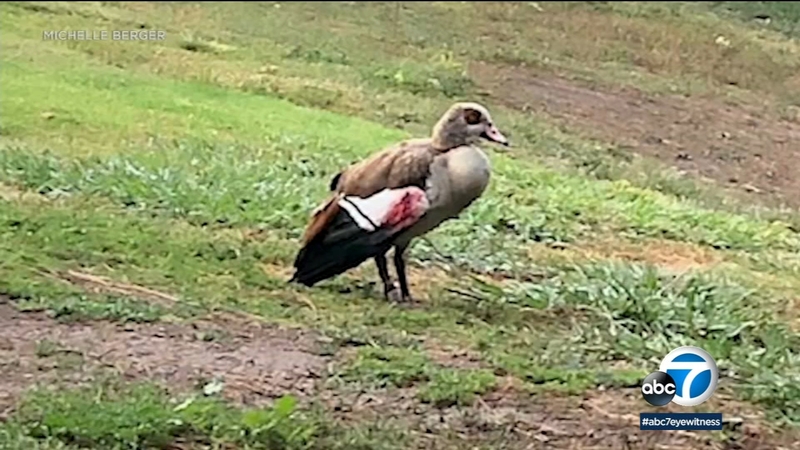 COSTA MESA, Calif. (KABC) -- Concerns over the well-being and safety of wildlife at TeWinkle Park in Costa Mesa are growing after several more ducks were found shot to death over the weekend.

Costa Mesa Police Lt. Ed Everett confirmed the department is aware of these incidents and are investigating.

Residents like Michelle Berger want to protect the defenseless animals.

"It's devastating that someone is coming to our community, to our park, and committing this type of crime against actually helpless innocent animals," she said.

Over the weekend more ducks were found shot to death at a @CityofCostaMesa park including this goose who had to be euthanized due to its injuries. @ABC7 #abceyewitness https://t.co/QlGP7k5sXz pic.twitter.com/sz0Qr3wAXK

An injured Egyptian goose was also spotted at the park before it was captured and euthanized due to its injuries. In total, about eight waterfowl have been killed in recent weeks.

"The person that is doing this is extremely heartless," said Berger.

Wetlands and Wildlife Care Center Executive Director Debbie McGuire told Eyewitness News they're currently treating a Pekin duck from the park that was shot with pellets.

She said she's horrified and can't believe someone could be so cruel to these animals.

She said according to the center's veterinarian, not all of the ducks died immediately.

"It's a slow painful death, which is pretty disturbing," McGuire said.

She's worried these incidents could escalate.

"If this person is getting comfortable killing ducks and geese, what's the next step?" asked McGuire.

Matt Austin, another city resident, is outraged and hopes whoever is committing these crimes is caught.

"For people to get away with this, that's absolutely not right, so I'm hoping we can set a good example and teach kids that things like this don't go unpunished," Austin said.

Meanwhile, Everett said patrol officers and park rangers are increasing their presence at the park.

He said they don't believe these shootings are taking place during normal park hours.

Anyone who may have information regarding these incidents is urged to call Costa Mesa Police at 714-754-5252.