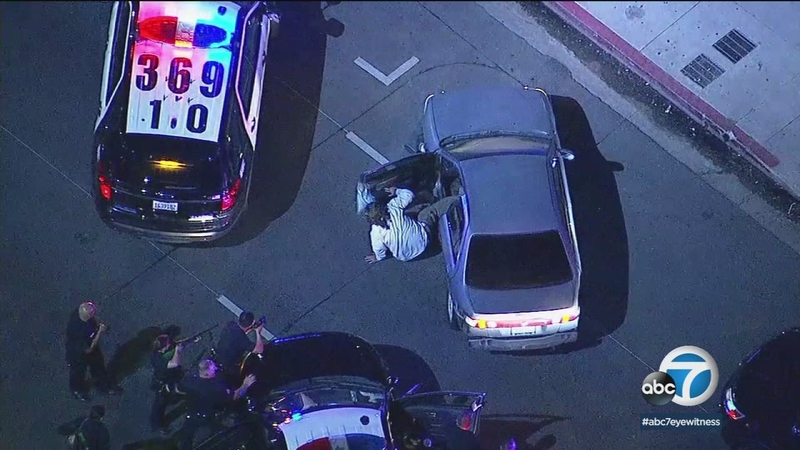 LOS ANGELES (KABC) -- Driving a stolen vehicle and wanted for DUI, a suspect led authorities on a bizarre, slow-speed chase through surface streets in the San Fernando Valley and Los Angeles on Thursday night.

After multiple PIT maneuvers and spike strip deployments while pedestrians and other drivers looked on, authorities were finally able to arrest the suspect near Ventura Boulevard and Gloria Avenue.

The chase began shortly after 10 p.m. on Sherman Way near Wilbur Avenue in Reseda, then continued eastbound into Encino and Los Angeles, where the suspect kept driving despite a flat front and rear tire on the right side of the vehicle.

A car thief wanted for DUI led authorities on a bizarre chase through LA surface streets on Thursday night.

After obeying a red light along Ventura Boulevard, the suspect proceeded with hazard lights blinking as authorities slightly backed off. Several pedestrians and other drivers in nearby cars stopped to take photos of the slow-moving vehicle.

The suspect eventually turned around at the intersection of Ventura Boulevard and Noeline Avenue and continued to drive with four flat tires, two of them worn down to the rim.

As the chase dragged on, more drivers along the road began exiting their cars and trying unsuccessfully to stop the suspect's vehicle while police cruisers trailed close behind.

Only in LA do random people try to intervene in a chase 🤦🏻‍♀️ The driver is now in custody. https://t.co/bQHxCmOUZD pic.twitter.com/Pf0OFTF2zi

At about midnight, authorities finally surrounded the suspect's vehicle near Gloria Avenue, where he exited the driver's seat with his hands up before getting onto his stomach. An officer then moved in to handcuff the suspect.

The driver was transported to a hospital for complaints of shortness of breath, authorities said.