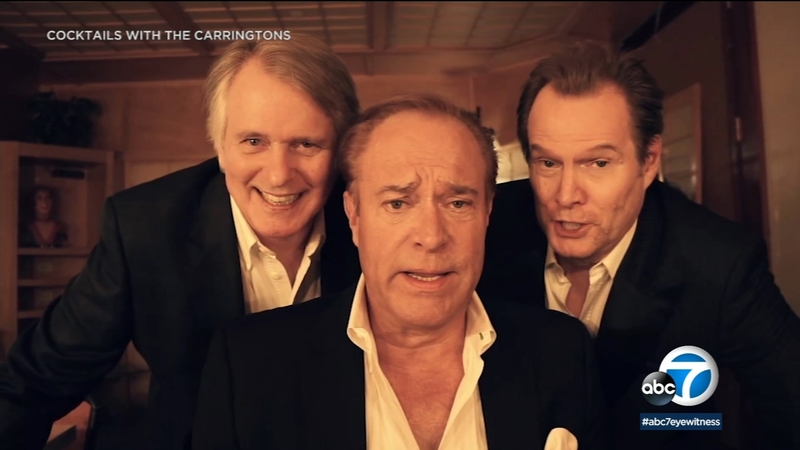 HOLLYWOOD (KABC) -- Back in the 1980s, during the days of the original "Dynasty," America tuned in for plenty of drama in prime time.

Now, three of the show's stars have joined forces for a new adventure, this time on the stage.

It's called "Cocktails With The Carringtons."

John James, Jack Coleman and Gordon Thomson are having fun re-living their days on "Dynasty" in a whole new way, singing songs and sharing stories about their days on the hit series.

The idea of "Cocktails With The Carringtons" began with James, who played Jeff Colby on the show.

"And I said, 'Guys, I have this crazy idea. But I've always wanted to be a rat packer. I always wanted to get up on stage and mess around with the guys, tell some jokes, tell some war stories and then sing and just go back to that period. I have to do this in my life," James said. "And, lo and behold, we're starting off on this adventure.."

The guys say they have 40 years now of real respect and affection for one another.

Thomson, who played Adam Carrington, said, "I don't think there's ever been a sort of unpleasant, antagonistic moment between any of us."

But on camera, they had plenty of unpleasant moments fighting for one reason or another.

Coleman, who played the series' second Steven Carrington, said, "I don't think anybody got through, probably an episode, without a battle with somebody. It was a pretty dysfunctional family."

"Cocktails With The Carringtons" offers some original music from the guys along with plenty of behind-the-scenes stories for fans.

"We have wonderful memories and stories about this show that I think, also, if you want to come to it, we know what it's about. There's no mystery. It's about 'Dynasty' and our memories and pleasures in doing it," Thomson said.

For ticket information, head to cocktailswiththecarringtons.com.