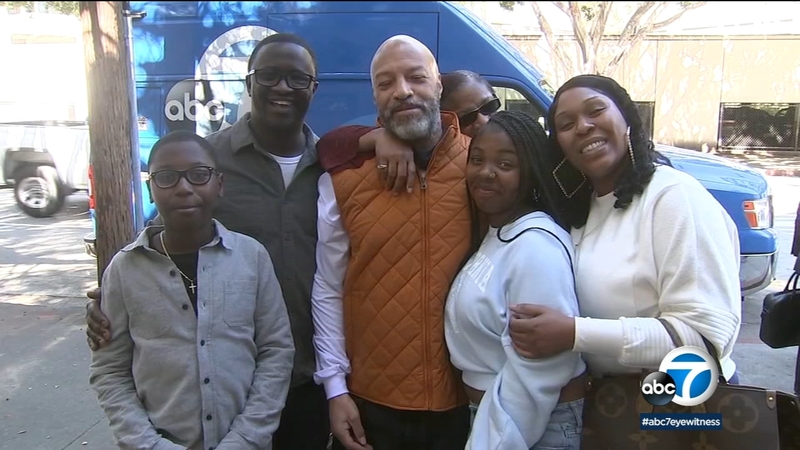 LOS ANGELES (KABC) -- After spending 27 years behind bars, a Southern California man is enjoying his first taste of freedom.

Earl Snoddy was convicted of a crime he says he didn't commit, and a judge overturned his conviction.

A man who served 27 years in prison for a Compton robbery under a three-strikes conviction is being released on time served after new questions were raised about his conviction.

"My day came true so I'm just happy, I'm just trying to take it all in," Snoddy said.

Snoddy was arrested for a violent robbery in 1995. A jury in Compton convicted him. It was a third criminal strike for Snoddy and under the three strikes law, his penalty was severe. Snoddy always maintained his innocence.

"Wrongful conviction is one of the most unfortunate things and that's why it's one of the leading reasons why when Earl reached out to us we went after the integrity of his conviction first," attorney Matthew Barhoma said.

Barhoma looked into Snoddy's case and said he was wrongfully convicted based on a lack of evidence linking him to the crime. A judge agreed and overturned the conviction and set Snoddy free.

"Favor comes to those who have money," Snoddy said. "I come from a poverty stricken area and in that area and the type of money I had, I didn't get the proper representation."

Surrounded by family, friends and his attorney, Earl Snoddy saw life outside of a prison cell for the first time in decades.

"I was grateful mostly to hear the judge overturn the conviction and it was just praise to the heart knowing he's going to be acclimated back into the family," Snoddy's sister Charlene Bickham said. "He's missed so much. He's got great nieces and nephews and everything."

After 27 years in prison, Snoddy is finally out. He says he first wants to get a big breakfast, and then get back to living his life as a free man.

"I want some pancakes, some eggs, and some bacon and sausage, and some milk and juice, and I want everybody to get out of my way, give me 50 feet and I'll be alright," Snoddy said.