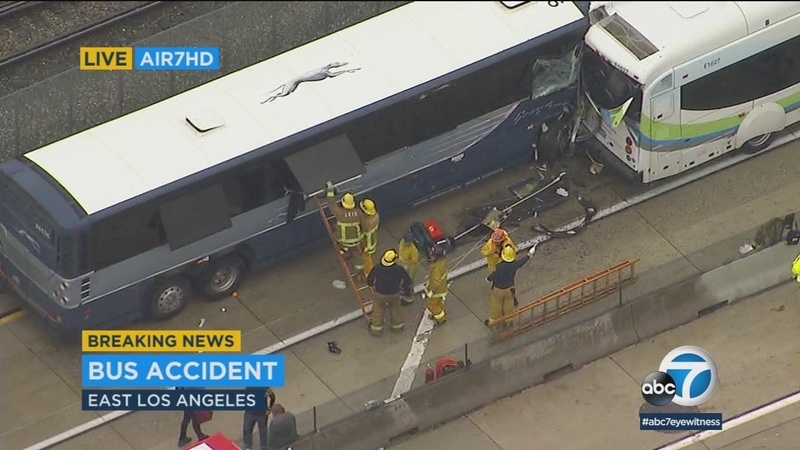 EAST LOS ANGELES (KABC) -- Thirteen people were transported to hospitals after two buses crashed on the 10 Freeway in East Los Angeles on Thursday.

According to Brian Humphrey with the Los Angeles Fire Department, a car left the roadway, struck a tree and tumbled into traffic lanes around 10:30 a.m. In that backup, a Greyhound intercity bus en route to Las Vegas rear-ended a Foothill Transit commuter bus on the eastbound 10 Freeway near Soto Street.

"The driver was trying to get onto the I-10 westbound from Soto, and lost control and went down the embankment. Therefore, that got the respondents from the CHP and L.A. Fire. Then you have a lane blocked, and then the chain of events that occurred from there," said California Highway Patrol Officer Roberto Gomez.
Thirteen ambulances were assigned to the incident, and authorities said as many as 40 people were initially assessed for possible injuries at the scene. Following the assessment, a total of 13 people aboard the buses were transported to area hospitals.