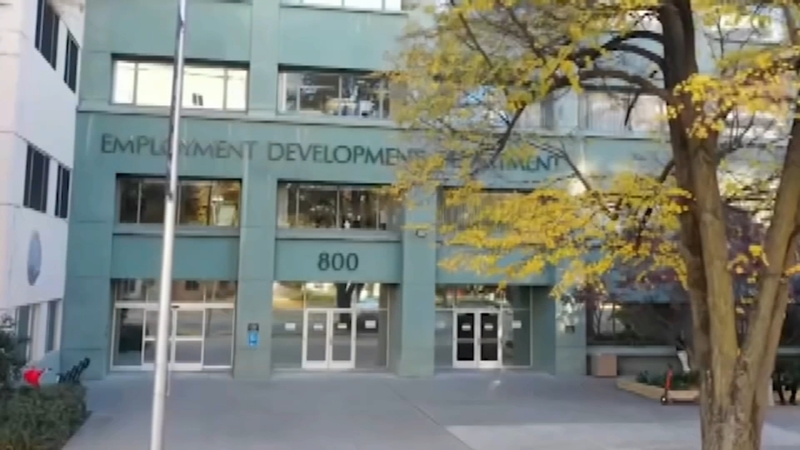 SAN FRANCISCO -- 7 On Your Side revealed for the first time last night the Employment Development Department closed all of its unemployment offices - not just for the pandemic - but for good, 25 years ago. The staff was moved instead to call centers, taking claims and questions by phone. It was partly to keep them safe from disgruntled claimants, but more so to improve efficiency. So why isn't it a better system after all these years?

RELATED: EDD offices have been closed to the public for over 25 years; here's why

So many things went wrong when claims poured in to the EDD at the start of the pandemic. Folks couldn't get work or get benefits. So they flooded the EDD's call center. It was instantly overwhelmed. Which has many wondering: after 25 years of providing service by phone, why isn't it a state-of-the-art system?

Nearly two million calls per week poured in to the EDD call center at the height of the pandemic, but a state audit found fewer than one percent were getting through.

RELATED: California unemployment crisis: 7 On Your Side investigates calamity at EDD

"We are still getting calls from people: 'I've tried for hours, I still can't get through.' Is that a unique experience or is it much more common than you would like it to be?" asked ABC7 reporter Kristen Sze during a "Getting Answers" episode with EDD spokeswoman Loree Levy.

"It's a lot more difficult than we want it to be," answered Levy.

It's a far cry from the system EDD envisioned 25 years ago, when California's unemployment offices all closed and staff moved into call centers, in part for their safety after a mass shooting at an Oxnard EDD office which killed three employees and a police officer back in 1993.

"The concern was that disgruntled claimants, people who didn't get their claims, especially after the Oxnard shooting, would be violent and the employees at EDD offices were behind some of the push to end in-person services," said former EDD director Michael Bernick.

However, Bernick says EDD's primary goal was "efficiency." For the first time unemployed workers could file a claim by phone, which took just 15 minutes on average, compared to nearly three hours in person.

After suspending the requirement, the EDD now says workers must look for work to receive unemployment benefits.

"They didn't have to come down, to get in a car or bus, go down to the UI office and wait in line for an hour," Bernick said. "Call centers are able to handle a greater volume of claims and you have hopefully a greater level of expertise."

A state audit in 2001 found calls to the EDD lasted just nine minutes on average. However, it also detected signs of trouble ahead.

The EDD added features like call routing and certifying for benefits by phone. It was also developing a computer system to process claims.

But not soon enough. When the Great Recession hit in 2008, the system kicked out more than 156 million calls.

For seniors, driver's license renewals have been waived to keep people from unnecessarily going to the DMV. But for the EDD's identity verification system, an expired license still cost a Redwood City woman her precious benefits.

"Back in 2011 we determined the call center was only able to handle 15 or 16 percent of calls where they were able to reach an agent. We were suggesting there needed to be automation, there needed to be some improvements, they needed to track why people were calling," said California state auditor Elaine Howle.

"The call center performance was dismal. It was down to 1 percent," she said.

EDD tried to reduce the need to speak with an agent by playing several minutes of recorded information with each call. But it only frustrated callers who had to sit through all the recordings only to have the call hang up.

"Please try again later," was the recording many callers heard before being disconnected.

"You would expect that since the mid-90s, that with all the technology advances that have come in, and with the brilliant minds out there, that we would have gotten better at it," said former EDD Supervisor Michael Dolphin.

"Let's have modern call center technology. My background, I represent Silicon Valley and know that it's just not that hard to set up a call center where people get a call back or they understand how long the wait time is," said State Senator Josh Becker (D - San Mateo).

The pandemic also presented new problems: call center agents had to work from home. Thousands were hired but not trained.

Many blame the EDD's old computer system for bungling claims, prompting millions to call for help.

"The IT system that EDD relies on is a 30-year-old system sitting on a 60-year-old computer programming language," said State Assemblyman David Chiu (D - San Francisco).

"We've known since back in '95 that the COBOL system was dead and gone," said Dolphin.

Assemblyman Chiu agrees. "No one knows the COBOL system anymore."

"I hate to be unkind, but all the brilliant minds got hired by Microsoft," said Dolphin.

"Since the last Great Recession, where we had the last big uptick, EDD -- we really should have taken the time to really upgrade our technology and be ready," said Assemblymember Phil Ting (D - San Francisco).

EDD also faced a higher threat of fraud during the pandemic -- no longer seeing claimants face-to-face like the old days. Fraudsters got away with as much as $31 billion last year.

All the while frustrated workers just wanted to talk to the EDD in person.

"I wish that you could go into an office, whichever office has your file..." said Oscar Alacaraz of Los Angeles.

Nissa Bryant of Santa Rosa feels the same. "I would drive down to So Cal and hold up all my paperwork..."

"We probably need some form of in-person, ombudsperson once the pandemic is over," said Bernick.

"We should be able to have a call center that works, but yes, I'd like to see some in-person. It'd be really terrific if they can get some personalized, individualized attention, either in person, you know, or at least on the phone," said Senator Becker.

"EDD needs to take a real step back and think holistically, comprehensively from top to bottom, and how it will reform its procedures to make sure that this never happens again," said Assemblyman Chiu.

The EDD call center is still overloaded to this day. Data show 2.6 million calls poured in during the first week of August... and only about nine percent got through to an agent.

Right now there is no plan to reopen unemployment offices. But overshadowing it all, the legacy of the mass shooting at an EDD office in Oxnard in 1993. A documentary about it comes out next year.

Have a question for Michael and the 7 On Your Side team? Fill out the form HERE!

7OYS's consumer hotline is a free consumer mediation service for those in the San Francisco Bay Area. We assist individuals with consumer-related issues; we cannot assist on cases between businesses, or cases involving family law, criminal matters, landlord/tenant disputes, labor issues, or medical issues. Please review our FAQ here. As a part of our process in assisting you, it is necessary that we contact the company / agency you are writing about. If you do not wish us to contact them, please let us know right away, as it will affect our ability to work on your case. Due to the high volume of emails we receive, please allow 3-5 business days for a response.