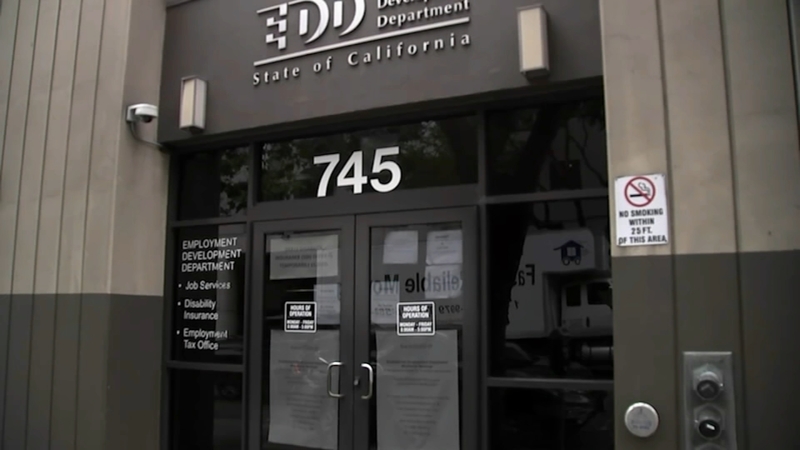 SAN FRANCISCO -- A federal indictment in Arkansas is shedding new light on the massive fraud that hit the California unemployment system during the pandemic.

The indictment says a Bank of America contractor was on the inside, helping cohorts cash in phony EDD debit cards -- and make off with $2.7 million. This incident shows the long arm of the EDD fraud -- this time, authorities say, all the way from Arkansas.

With his account frozen and his calls unanswered, one disability recipient went to the EDD office -- and found a line wrapped around the block.

Previously, Bank of America detected fraud and froze thousands of EDD debit cards to try to stop it. In the process, many legitimate workers were locked out of their unemployment benefits.

Bank of America denied their claims and froze their accounts, along with thousands of others.

RELATED: Unemployed workers who did not receive big 2020 tax break may soon get it

"We believe the overwhelming majority of frozen accounts represent frauds that were stopped, representing hundreds of millions or billions in criminal activity," said Bank of America executive Faiz Ahmad during an explanation to state lawmakers last year when questioned on why the bank froze all of those accounts.

A federal judge later ordered Bank of America to reopen those cases and restore legitimate claims.

Now, the latest attempt to unravel California's fraud fiasco has landed in the lap of a federal grand jury -- in Arkansas.

"What we will find out as the case unfolds is just what went on, how it happened and why..." said Assemblyman Jim Patterson (R - Fresno).

The grand jury in Little Rock has indicted 10 Arkansas residents on charges of cashing in California EDD debit cards.

It says Clark used her position and "accessed the Bank of America systems without authorization to re-issue debit cards, remove fraud blocks and add credits to unemployment accounts."

The U.S. Attorney's office said the other defendants then used the debit cards to withdraw $2.7 million.

One defendant was out on bond facing a felony murder charge when authorities say he joined the conspiracy.

"I've been concerned about that from the beginning," Assm. Patterson said.
Assm. Patterson has pushed for investigation of potential insider fraud at many state agencies, including the EDD.

"That's gonna be a big important lesson. I hope the EDD and Bank of America learn, so they're not vulnerable going forward," Assm. Patterson said.

The $2.7 million loss is a tiny fraction of California's unemployment fraud. The EDD estimates it gave $19 billion to fraudsters in phony unemployment claims. Bank of America says it lost at least $200 million to debit card fraud -- and says it wants out of the EDD business.

A class action lawsuit on behalf of thousands of EDD debit card holders is still ongoing in Southern California. A federal judge last year ordered Bank of America to reopen claims for reimbursement for unauthorized transactions. The bank had automatically closed thousands of them as it tried to stop fraud.