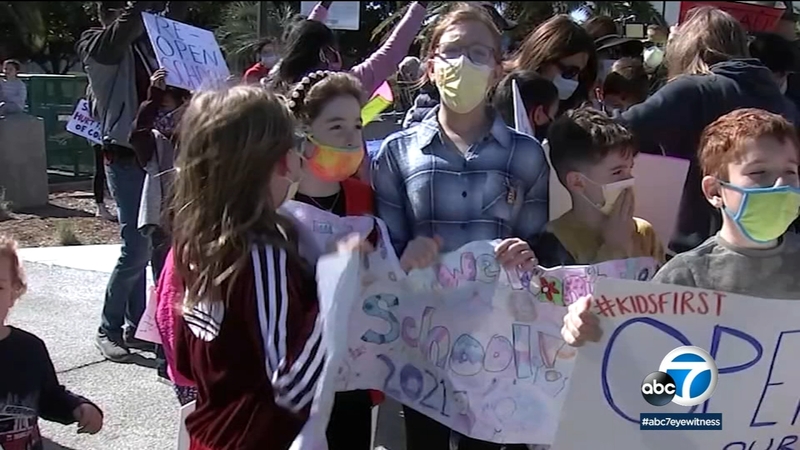 LOS ANGELES (KABC) -- Dozens of Los Angeles Unified parents and students held a protest Saturday in Westwood amid a push to reopen schools.

A large group of demonstrators gathered outside the Federal Building amid increasing pressure on the district, the second-largest in the nation, to reopen its campuses for in-person instruction.

The push comes after nearly a year of distance learning, and as some schools students across the Southland return to the classroom.

Organizers gathered a handful of parents on a school bus to make scheduled stops across L.A. in an effort to reach out to other parents.

Parents with the Los Angeles Unified School District held a protest Monday to put pressure on the district to reopen schools.

LAUSD Superintendent Austin Beutner says preschools and elementary schools could reopen by April 9, but he adds the plan depends on the vaccine rollout.

Gov. Newsom says California will reserve 10% of all of the first-round vaccine doses it receives specifically for teachers, educators and childcare workers.

The LAUSD announced Wednesday a proposal to operate a large-scale site at SoFi Stadium dedicated to vaccinating public and private school teachers and staff once they become eligible.

But organizers of Saturday's rally said that's not enough.

"We're the only city that's making up new rules to not open, which is why we're the worst in the world in terms of getting kids back (to school)," said Ross Novi, found of L.A. School Uprising. "We understand there are families that are at risk, there are teachers that are at risk -- people who are at risk should not go back to school, we understand that. But there are many more who are OK to go back, and with proper mitigation, we have seen it can be a safe place to teach and work -- just like every other workplace that has opened up."

Meanwhile, some LAUSD parents were planning another Zoom blackout protest on Saturday, similar to one held that was held last Monday.

Gov. Gavin Newsom vowed Tuesday that classrooms will reopen "very, very shortly." But his forecast was called into question by Los Angeles teachers who continue to insist that the state's largest school district won't open without more vaccinations.

"The pressure building to return to schools is political. It is not science," the United Teachers Los Angeles said in a statement.

The union said it will vote next week to refuse resuming in-person classes unless certain demands are met, including that all returning staff get access to vaccinations and COVID-19 case numbers in the county continue to decrease.

Some Los Angeles Unified School District parents are planning another Zoom blackout protest on Saturday, similar to one held that was held Monday.