KABC
LOS ANGELES (KABC) -- More than a dozen Southern California residents, including actresses Felicity Huffman and Lori Loughlin, have been charged in the largest college admissions cheating scam ever prosecuted in the United States.

More than a dozen Southern California residents, including actress Lori Loughlin, have been charged in a massive college admissions cheating scam.

So who are the Southland residents charged in this scandal? Here's what we know:

Felicity Huffman (Los Angeles, Calif.)
Huffman starred in ABC's "Desperate Housewives." Huffman was charged with conspiracy to commit fraud, punishable by up to 20 years in prison. She was arrested Tuesday at her Los Angeles home and released on $250,000 bond. A judge ordered her to stay within the United States.

Court documents said Huffman paid $15,000 that she disguised as a charitable donation so that her daughter could take part in the college entrance-exam cheating scam.

Court papers said a cooperating witness met with Huffman and her husband, actor William H. Macy, at their L.A. home and explained to them that he "controlled" a testing center and could have somebody secretly change her daughter's answers. The person told investigators the couple agreed to the plan.

Macy was not charged; authorities did not say why. Macy told Parade magazine in January that the college application process for their daughter was a source of stress. The couple's daughter, Sofia, is an aspiring actress who attends Los Angeles High School of the Arts. Huffman later made arrangements to pursue the scheme a second time, for her younger daughter, before deciding not to do so, court documents stated.

Loughlin and her husband allegedly gave $500,000 to have their two daughters labeled as recruits to the USC crew team, even though neither participated in the sport, thereby facilitating their admission to USC, the criminal complaint states.

Jane Buckingham (Los Angeles, Calif.)
Buckingham is the chief executive officer of a boutique marketing company in L.A., according to the criminal complaint document. In or around June 2018, Buckingham agreed to make a purported charitable donation of $50,000 to a non-profit foundation called the Key Worldwide Foundation (KWF) based in Newport Beach, the document says. The complaint also states that the money was in exchange for one corroborating witness (CW-1) in the case to arrange to have another corroborating witness (CW-2) take the ACT on behalf of Buckingham's son the following month.

The complaint outlines several conversations between Buckingham and CW-1 arranging the testing situation. There was even an image showing a handwriting sample allegedly showing Buckingham's son's writing, so the writing on the actual test form would match. Buckingham also contacted the first witness to "do the same thing" for her daughter for the ACT.

I-Hsin "Joey" Chen (Newport Beach, Calif.)
Chen operates a Torrance-based provider of warehousing and related services for the shipping industry, court documents show. Chen is accused of paying $75,000 to a for-profit company called the Edge College & Career Network, LLC - also known as "The Key." The money was in exchange to have CW-1 arrange to have CW-2 purport to proctor Chen's son's ACT and correct his answers, the document states. Chen's son took the exam at the West Hollywood Test Center.

On or around April 16, Chen paid CW-1 $75,000 to participate in the cheating scheme, the complaint states. The money was deposited into The Key's bank account, and CW-1 agreed to provide Chen with an invoice falsely indicating that the payment was for "consulting" services for Chen's business. Chen's son scored a 33 out of a possible 36 on the ACT exam.

Devin Sloane (Los Angeles, Calif.)
Sloane is the founder and CEO of a Los Angeles-based provider of drinking water and wastewater systems, among other businesses, the court document says. On or around Jan. 17, 2017, Sloane is accused of conspiring to bribe USC's Heinel to designate Sloane's son as a recruit to the USC men's water polo team, thereby facilitating his admission to the university. CW-1 told law enforcement that he agreed to secure Sloane's son's admission to USC as a purported water polo recruit, even though Sloane's son did not play water polo competitively.

The criminal complaint contains communication between a graphic designer and Sloane about finding water polo athlete images that would match the look of Sloane's son.

A few weeks later, CW-1 emailed Sloane asking to send $50,000 to Heinel and $200,000 to "our foundation," KWF, after Sloane's son receives his final acceptance letter in March. The document states that Sloane sent Heinel by FedEx a $50,000 check payable to "USC Women's Athletics." Then in March, USC mailed Sloane's son a formal acceptance letter. The next month, Sloane wired $200,000 to KWF, the document states.

Michelle Janavs (Newport Coast, Calif.)
Janavs is a former executive at a large food manufacturer formerly owned by members of her family. She is accused of participating in both the college entrance exam scheme and the athletic recruitment scheme by conspiring to use bribery to facilitate her daughter's admission to USC as a purported beach volleyball recruit.

Around Oct. 27, 2017, Janavs' daughter took the ACT exam at the West Hollywood Test Center with CW-2 as the purported proctor. Janavs' daughter received a score of 32 out of a possible 36. A few days after the test, CW-1 directed directed a KWF employee to send an invoice to Janavs in the amount of $50,000. At the end of November, Janavs sent a check for $50,000 to KWF. The criminal complaint also outlines steps Janvas and Heinel both allegedly took to falsely make Janvas' daughter appear to be the winner of multiple beach volleyball tournaments in California. Included in the document was a phone call transcript that shows CW-1 telling Janavs where to send bribe payments, as Heinel planned to present her to the USC admissions committee as a beach volleyball player. The document also outlined similar steps Janavs allegedly took for her younger daughter as well.

Douglas Hodge (Laguna Beach, Calif.)
Hodge is the former CEO of a large investment management company based in Newport Beach. Hodge is accused of agreeing to use bribery to facilitate the admission of two of his children to USC as purported athletic recruits and seeking CW-1 to secure the admission of a third child to another school through bribery as well.

Toby MacFarlane (Del Mar, San Diego County, Calif.)
MacFarlane was a senior executive at a title insurance company. He is accused of participating in the college recruitment scheme by agreeing to use bribery to facilitate the admission of his daughter to USC as a purported soccer recruit, and later, his son as a purported basketball recruit.

With the aid CW-1, MacFarlane's daughter was presented to the USC subcommittee for athletic admissions around November 2013. She was formally admitted to USC the following spring. In May, MacFarlane issued a check for $200,000 to CW-1's The Key, the document states. In 2016, MacFarlane is accused of similar bribery for his son.

Stephen Semprevivo (Los Angeles, Calif.)
Semprevivo is an executive at a privately held provider of outsources sales teams, based in Agoura Hills. Semprevivo is accused of agreeing to bribe a Georgetown tennis coach to designate his son as a tennis recruit, despite the fact that his son did not play tennis competitively, in order to facilitate his admission to Georgetown, the document states. Around April 22, 2016, Semprevivo's son was granted formal admission to Georgetown. Around the same time, a KWF employee emailed Semprevivo and his spouse an invoice in the amount of $400,000 for their purported "private contribution" to KWF. Around April 28, the Semprevivo Family Trust issued a check to KWF in the amount of $400,000 the document stated.

Semprevivo's son matriculated at Georgetown around the fall of 2016. Since enrolling at the university, he has not joined the tennis team, the criminal complaint says.

Robert Flaxman (Beverly Hills, Calif.)
Flaxman is the president and CEO of a Los Angeles-based real estate development firm. He is accused of participating in both the college recruitment scheme and the college entrance exam scheme. The document outlined Flaxman's participation with CW-1 to get his son into University of San Diego. CW-1 even wrote an essay for Flaxman's son, the document states. Flaxman's son was formally admitted to USD in March 2016. The next month, a KWF employee emailed Flaxman an invoice for $250,000. Flaxman wired two payments of $125,000 each to KWF on or about May 13, 2016 and June 23, 2016, the document says.

Homayoun Zadeh (Calabasas, Calif.)
Zadeh is an associate professor of dentistry. He is accused of conspiring to bribe Heinel to designate his daughter as a lacrosse recruit, despite the fact that she did not play the sport competitively, thereby facilitating her admission to USC, the complaint says.

The document outlines steps Zadeh took along with CW-1, Janke and Heinel to fabricate a lacrosse profile for Zadeh's daughter, who eventually got into USC. In April 2017, a KWF employee emailed an invoice to Zadeh and his spouse for their purported "pledge" of $100,000. The documents state that Zadeh's wife responded to that email, saying that the two were in the process of refinancing their house to take some of the equity out in order to make payments to KWF.

Jorge Salcedo
Salcedo was UCLA men's soccer coach. UCLA said Salcedo has been placed on leave pending a review and will have no involvement with the team. Court documents say Salcedo, who was the head coach for the men's team, helped get two applicants who did not play competitive soccer into UCLA in exchange for $100,000 in 2016 and 2018.

Laura Janke
Janke is a former women's soccer assistant coach at USC. Court documents state that Janke participated in the alleged admission scheme and aided in getting students admitted to USC by fabricating sports profiles.

Jovan Vavic
Vavic was a water polo coach at USC. Hours after news of this investigation broke, USC said it fired Vavic. Court documents say Vavic was paid $250,000 and designated two students as recruits for his water polo team to facilitate their admission to USC. An FBI spokesman said Vavic was taken into custody Tuesday in Honolulu.

Ali Khosroshahin
Khosroshahin is a former women's soccer coach at USC. The complaint states that Khosroshahin and Janke allegedly received payments sent to their private soccer club as part of the scheme. 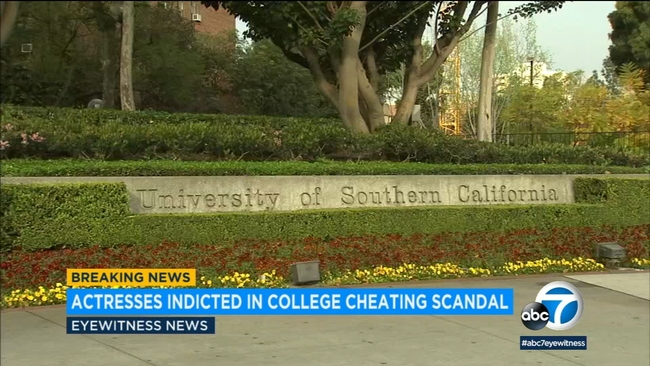