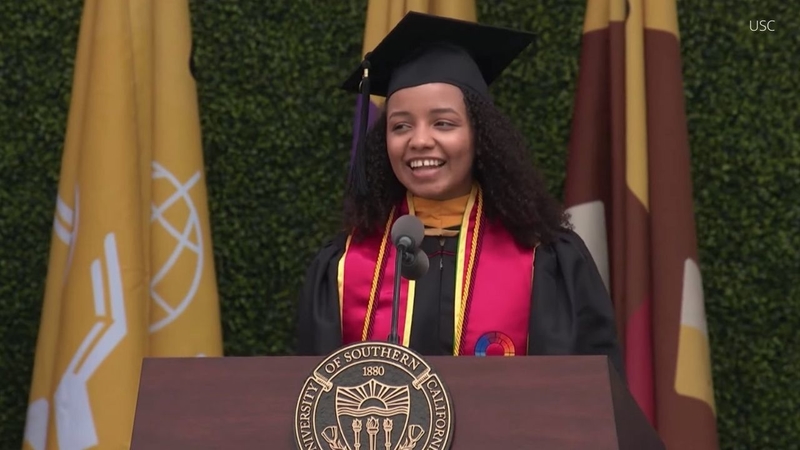 LOS ANGELES (KABC) -- Apart from holding in-person commencement ceremonies for the USC classes of 2020 and 2021, the university on Friday also marked a unique moment in its history.

Among those graduating was Tianna Shaw-Wakeman, who became the university's first Black valedictorian, according to a tweet from USC.

Tianna Shaw-Wakeman, USC’s first Black University Valedictorian. "[T]his revelation stands as a testament, albeit small, to both how far we’ve come as an institution, as a country... and how far we have to go." pic.twitter.com/I8XTKScImz

After earning her bachelor's degree in psychology from the USC Dornsife College of Letters, Arts and Sciences, Shaw-Wakeman is now also graduating with her master's in social entrepreneurship from the USC Marshall School of Business.

Speaking before the graduating class, she expressed what her accomplishment meant.

"This revelation stands as a testament, albeit small, to both how far we've come as an institution, as a country ... and how far we have to go," she said.

Born in Texas, she spent much of her younger years growing up in South Carolina and Tennessee, according to a profile on her by USC News.

She described her first day at USC as a "shock."

Once on campus, she poured her efforts into issues like sustainability, joining USC's Environmental Core during her freshman year and eventually organizing the 2019 climate strike.
EMBED More News Videos

Examine the systemic racism pervading American schools through the eyes of Black students, families and educators who are challenging the system.

Those efforts naturally evolved into Shaw-Wakeman co-founding DivestSC, an organization committed to getting the university to invest in clean technologies and renewable energy instead of the fossil fuel industry.

That endeavor resulted in the USC Board of Trustees' Investment Committee voting to liquidate existing fossil fuel investments over the next several years.

Her other interests include volunteering with Teach for Los Angeles, tutoring elementary school students in reading and writing.

"I only saw my role, working in sustainability and doing all the different things that I did, as trying to be a vessel for this energy and this vibrancy about how important sustainability is that was already there among the students," she said.