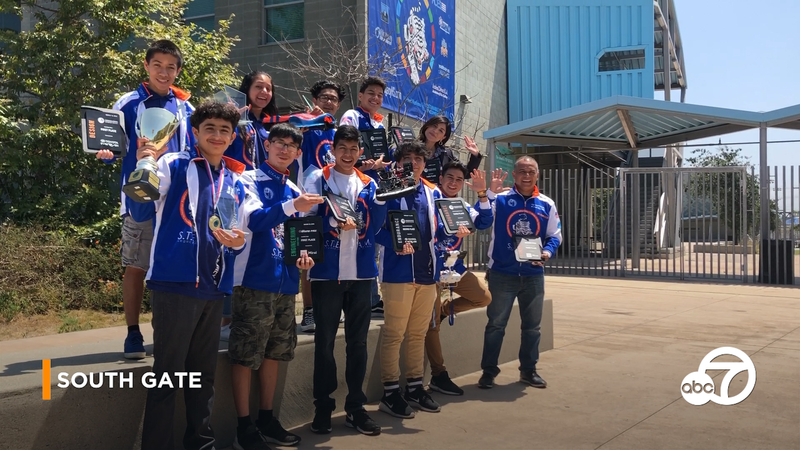 SOUTH GATE, Calif. (KABC) -- A group of students from STEAM Legacy High School in South Gate won a world automotive championship and made history in the process.

In June, the students traveled to the Czech Republic to compete in the 2019 Horizon Grand Prix. The competition addresses climate change by having students create and put to the test alternative energy solutions.

The STEAM Legacy team, which was one of 19 teams in the race, won first place. Not only did they win, they made history in the competition by building the first prototype fuel cell vehicle that is capable of running on pure hydrogen.

"We were the first team in the whole competition to actually run purely on hydrogen. Whenever we showed it off to the judges, they were blown away," Gallardo said.

During the race, STEAM Legacy was strategic and raced by switching off between electricity and hydrogen.

The organizers said: "STEAM legacy traveled a total of about 53 miles in 6 hours. That is ridiculously impressive...These students are pushing the boundaries of what's possible in a fuel cell powered vehicle...The most lasting impact these students will have on the automotive industry is in how hydrogen fuel cell technicians will be trained in the future."

"We were going against private schools, we were going against top-notch schools from all over the world," said Nidia Ibarra, a STEAM Legacy student. "And, to know that we come from a public school that we can beat all of those people, it shows how much dedication can take you to the top."