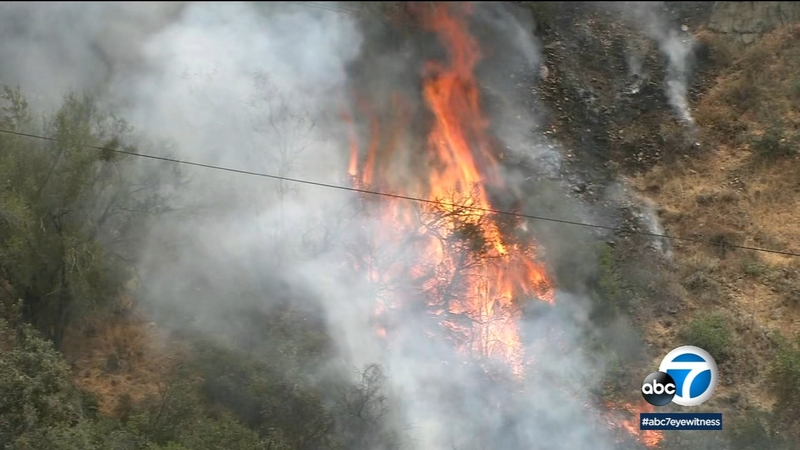 YUCAIPA, Calif. (KABC) -- Mandatory evacuation orders have been issued for communities near the El Dorado fire in the Yucaipa area.

Firefighters are working hard to protect threatened homes and buildings in several communities, including Forest Falls.

At least 10 buildings have been destroyed, including four homes. The El Dorado Fire has burned at least 13,592 acres and is 31% contained as of Thursday evening.

When the fire started, it was threatening the Yucaipa and Oak Glen communities, but has since moved north near Forest Falls, closer to homes.

Even though mostly smoke could be seen from the blaze, officials said the Forest Falls community was "significantly threatened" by the fire on Thursday.

"Today, we're working very hard on trying to control the fire from coming off the hill and getting in behind the structures," said Asst. Fire Chief Kathleen Opliger with San Bernardino County Fire Department.

Opliger said because of the smoke, it's been difficult to get air resources on top of the fire. The thick forest was also an issue.

"We haven't seen fire history in this canyon since the 30s, so it is so important that these firemen have the ability to move in and out of the homes without citizens impeding them," said Opliger.

By early Thursday, almost everyone in town had evacuated. Around noon, about 80 firefighters were positioned near homes to protect what they could.

For Thursday, officials said evacuation orders were in place for the following areas:

- All areas between Angelus Oaks and Onyx Summit evacuate via Hwy 38 north to Big Bear.

- The following portion of Yucaipa and all of Oak Glen: All homes and businesses north and east of this line: from the intersection of Hwy 38 and Bryant to Carter, south on Jefferson to Ave E south to Wildwood Canyon Road to the intersection with Oak Glen.

OTHER EVACUATIONS: San Bernardino County authorities have put together an interactive map of evacuation areas. To find out if your home is in an evacuation area, you can enter your address in the map.