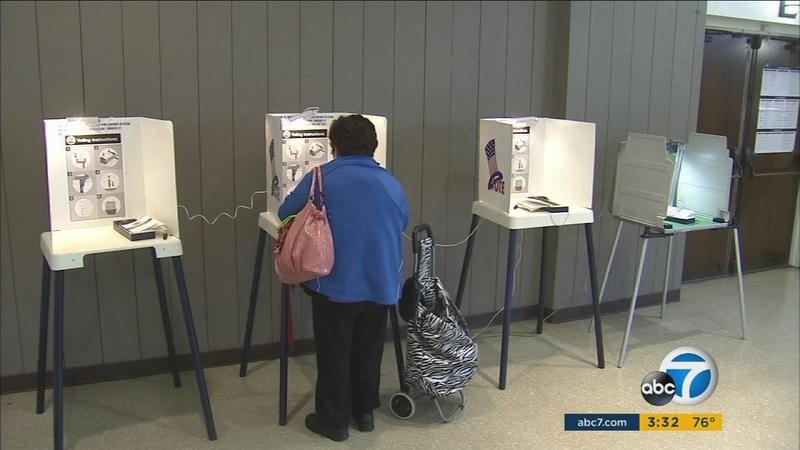 L.A. Mayor Eric Garcetti is up for reelection, facing 10 challengers in a contest that seems likely to result in a second term for the incumbent. Some of Garcetti's opponents argue that he has not done enough to combat crime and homelessness. Others fear that he has his sights set on higher public office and would leave his mayoral post to pursue such an ambition.

Garcetti has touted accomplishments that have occurred since he won his first term in 2013, including supporting a minimum wage hike, helping the economy by lowering the business tax, encouraging the entertainment industry through tax credits and helping pass a $1.2 billion measure in November to build housing for the homeless.

Eyewitness News caught up with Garcetti as he cast his ballot.

"We have tremendous momentum. We've cut our unemployment rate in half, we've paved more streets than ever before; we didn't just get one but two football teams," he said. "We see a lot of hope, a lot of opportunity and I want to keep that momentum. City Hall is focused on real things - less fluff, more stuff."

Also on Tuesday's ballot are Measures M and N, which would regulate licenses for the sale of marijuana. Measure M, proposed by the L.A. City Council, would give that political body and the mayor authority to establish rules covering all aspects of the industry locally - including where pot shops can operate and how they market their product.

Measure N would impose an industry-written regulatory scheme, which calls for giving permitting priority to 135 businesses that have been allowed to operate under the previously approved Proposition D ban.

A 1/4-cent sales tax is proposed to prevent and combat homelessness under Measure H. If approved, the legislation would raise an estimated $355 million per year for 10 years.

Measure S would place a two-year moratorium on construction projects that require a zone change or height district change, or an amendment to the L.A.'s General Plan. The initiative is aimed at slowing development growth in the city.

Election officials encouraged voters to be involved in this election and cast their ballot.

"This is where the rubber meets the road, where your vote really does make a difference," said county clerk Dean Logan.

The polls close at 8 p.m. For more information, visit lavote.net.