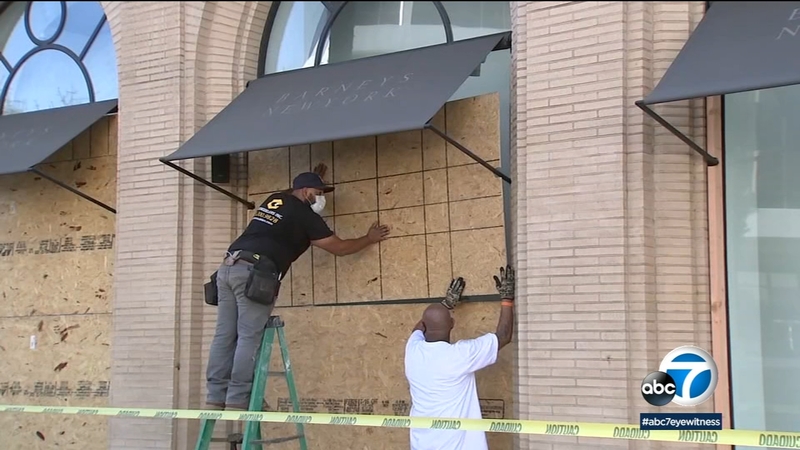 Authorities say Rodeo Drive will be shut down to vehicle and pedestrian traffic for 48 hours through Wednesday, Nov. 4. The popular street lined with high-end stores, along with other locations, has been targeted during past protests. Police suggest if businesses on Rodeo Drive plan to board up storefronts, they do so no later than Monday.

Starting Saturday, Beverly Hills police say officers will begin working 12-hour shifts with no days off through the following week. The move comes as the department prepares for maximum deployment of officers.

"It's really in response to the fact that others believe that our area is one that should be targeted in terms of coming to protest, that we feel we have to be responsive and protect everybody," said Mayor Lester Friedman.

RELATED: When will we know the winner of the 2020 presidential election? These are the 3 likely scenarios
EMBED More News Videos

BHPD is also hiring 80 armed security guards and partnering with the Santa Paula Police Department's SWAT Team for election week -- all to prepare for possible protests and unrest following the election.

"We have a small police department relative to the area that we have and those extra resources are going to be helpful so that we ensure that if there is a problem, that we can be able to take care of it," said Lester.

The city says this is all out of an abundance of caution and that after Election Day, they will require anyone who plans to protest in Beverly Hills to apply for a permit.

LAPD is also preparing for potential violence in the wake of election results. The department says officers are receiving ongoing training on crowd control in preparation for protests related to the election.

However, L.A. Mayor Eric Garcetti said Wednesday there is "no intelligence'' suggesting any sort of widespread plot to carry out violence or voter-intimidation locally during the upcoming election

"We are very prepared for the election, but at the same time I don't want to buy into a narrative that there's going to be chaos during our election," he said during a virtual press conference. "We prepare for the worst, but we are hoping and expect generally the best. There may be individual instances, we'll see some stuff around the country, but don't let any of that change the narrative of you, your right to vote."

Garcetti said LAPD will be prepared to respond to any incidents of violence or voter intimidation at the polls.

"Law enforcement isn't and oftentimes by law allowed to be right at an election site, because ... that's not the sort of country we live in," the mayor said. "But they are available to protect our rights when we need them should anybody through violence or other means try to take that away.