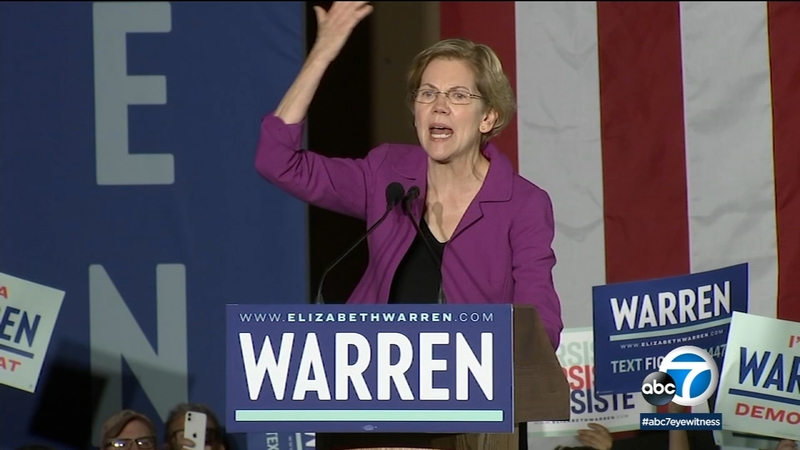 Warren campaigns in LA as Biden picks up key endorsements

EAST LOS ANGELES (KABC) -- The day before Super Tuesday was a wild one in the race for the Democratic nomination.

Pete Buttigieg dropped out, then showed up in Texas to endorse Joe Biden. Amy Klobuchar did the same.

"It is up to all of us to put this country back together, to heal this country and build something even greater," Klobuchar said. "I believe we can do this together and that is why today I am ending my campaign and endorsing Joe Biden for President."

But campaigning at East LA College on Super Tuesday eve, Elizabeth Warren cautioned her 3,000 supporters against a Joe Biden presidency.

"No matter how many Washington insiders tell you to support him, nominating fellow Washington insider will not meet this moment," Warren said. "Nominating someone who wants to restore the world before Donald Trump when the status quo has been leaving more and more people behind for decades is a big risk to our party and for our country."

Warren needs a big showing on Super Tuesday, not just in her home state of Massachusetts, but in delegate-rich California and Texas. Standing in her way is Bernie Sanders, who won New Hampshire and Nevada and is now favored to win California.

"This election is about power," Warren said. "About who has too much of it, about who needs more of it. Voters deserve a choice of someone with unshakable values who can also get things done and bring all kinds of Democrats along with her."

Although Biden hasn't shown the ability yet to unite the progressive wing of the party, his string of big endorsements after his win in South Carolina has created a momentum that he hopes to carry into Super Tuesday. Also endorsing Biden Monday was Beto O'Rourke.

"Every single one of us is going to get after it and vote tomorrow," O'Rourke said. "Are you with me? Are you with Joe?"

Biden praised all the endorsements, with a compliment to Buttigieg he says he rarely gives.

"He reminds me of my son Beau," Biden said. "I know that may not mean much to most people, but to me, it's the highest compliment I could give any man or woman."