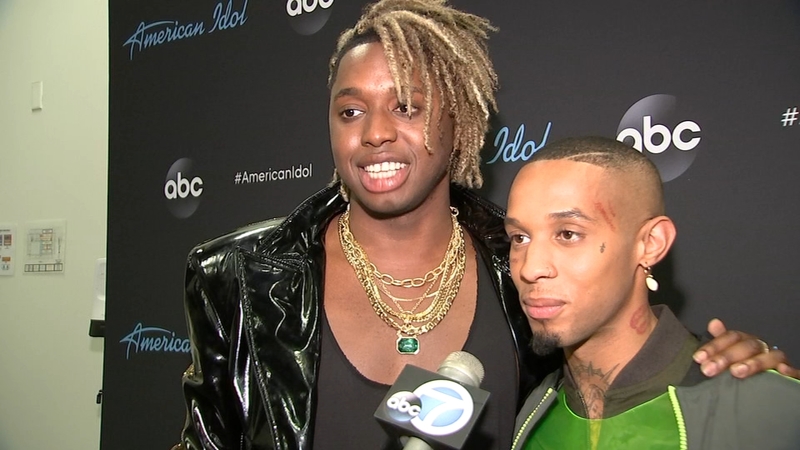 LOS ANGELES (KABC) -- The top 10 contestants on this season of "American Idol" sprinkled a bit of Disney magic throughout this week's episode.

The hopefuls spent some time at Disneyland to help get them in the mood for "Disney Night."

The show opened with judges Katy Perry, Lionel Richie and Luke Bryan at the theme park, singing the "Snow White and the Seven Dwarfs" song "Hi-Ho, Hi-Ho, it's off to work we go!"

Perry is an admitted, unabashed, ultra-Disney fan and her enthusiasm was evident as she dressed in full Ursula costume from "The Little Mermaid."

Actress Rebel Wilson is serving as a mentor for the top 10. And this week, fans of the show can vote live nationwide to select their favorites.

Uche performed first, singing a not-too-well-known Disney song: "Eye to Eye" from "A Goofy Movie." While the judges discuss not knowing the song, Goofy, the character, comes out from backstage and saves the day.

Laci Kaye Booth channeled Rapunzel and sang "I See the Light" from "Tangled." Bryan thinks he's seeing a Disney princess being born; Perry teased that Laci's sparkly high heels looked like she stole them from Cinderella.

Alejandro Aranda put his own spin on the Oscar-winning song "Remember Me" from "Coco." The judges praised him for pushing himself out of his comfort zone each and every week.

We went back to 1995 and "Pocahontas" for Alyssa Raghu's song; another Oscar winner, "Colors of the Wind." Perry thought the performance was beautiful and elegant, and praised her for pushing to hit some new notes.

Wade Cota paid tribute to Buzz and Woody and sang the Oscar nominated "You've Got a Friend in Me" from the 1995 classic "Toy Story." Bryan joked about Cota's roots being in heavy metal, and now he's nailing these other types of songs. Perry said Wade made Randy Newman proud.

Another Oscar nominated Newman tune, from "Toy Story 2," was also featured. Walker Burroughs sang "When She Loved Me." Richie called Walker a "pearl" and said the performance was as close to perfect as it could be.

Phil Collins won the Oscar for 1999's "You'll Be in my Heart" from "Tarzan." That's the song we heard from Dimitrius Graham. Bryan patted himself on the back, because he's the judge who saved Dimitrius last week. Richie simply encouraged fans to vote if they don't want to see people in the position of being eliminated.

Laine Hardy not only chose an old song, it's one most wouldn't recognize: "Oo-De-Lally" from 1973's "Robin Hood." It has a country flavor to it, so it fit him just fine. And he said it's a favorite of his dad. The judges were impressed.

Rounding out the performances this week was Jeremiah Lloyd Harmon. He reached back in the Disney songbook and landed on 1977's "Pete's Dragon" and the tune "Candle on the Water." The judges all agreed Harmon looks like he's in control on the stage and always delivers.

So who did America vote into the top 8, and who got sent home?

That left Uche and Dimitrius Graham on the edge of elimination. Did the judges use the one save they have to use the whole season on one of these two? No, they did not.
Report a correction or typo
Related topics:
arts & entertainmenttelevisiondisneyamerican idolreality television
Copyright © 2021 KABC-TV. All Rights Reserved.
TOP STORIES
18-month-old dies after being struck in North Hills hit-and-run: LAPD
NLCS Game 2: Justin Turner scratched with neck injury for Dodgers
Bill Clinton released from UCI Medical Center after blood infection
LA County wants Vanessa Bryant to take psychiatric exam before trial
Coast Guard: Ship owner, operator of interest in OC oil spill
10-year-old boy says father 'drowned him a lot,' court records show
US religious group says 17 missionaries kidnapped in Haiti
Show More
Masks and vaccines are a must this holiday season, CDC says
Evidence of water vapor found on 1 of Jupiter moons: NASA
Strike dodged with deal between film and TV crews, studios
NASA's asteroid hunter Lucy soars into sky with diamonds
Karen Bass reiterates pledge to make solving homelessness top priority
More TOP STORIES News