'American Idol' down to final 3 after viewers vote 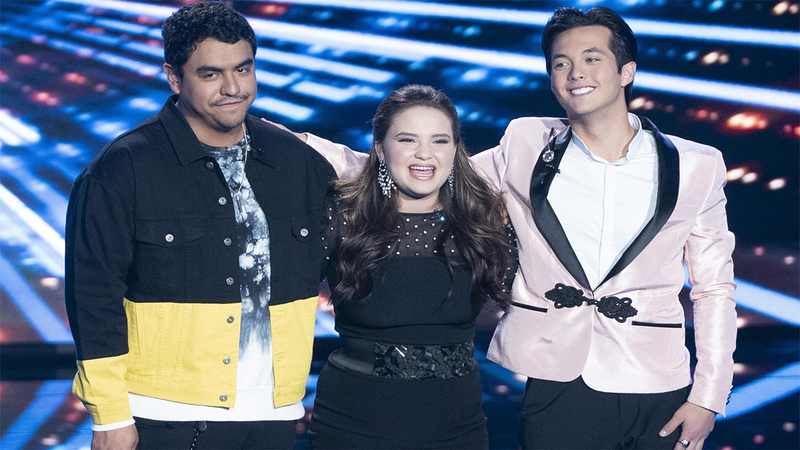 'American Idol' down to final 3 after viewers vote

LOS ANGELES (KABC) -- The journey to find the next music superstar continues as the five remaining "American Idol" hopefuls performed three times each in this season's semi-finals.

In this show, each contestant sang three very different songs: one pick from in-house mentor Bobby Bones; one selection from Sir Elton John's world-renowned catalog; and lastly, one song dedicated to a hero in each of their lives.

Here's a recap of each of the five semi-finalists and their three performances:

Wade Cota
His first song came from Bones, a bluesy "You are the Best" by folk-rock singer Ray LaMontagne. Wade says at first he was upset by the choice because he'd already done a song by the artist. But he ended up embracing it. Katy Perry said she felt Wade was challenged, and he met the challenge with this song; Luke Bryan said he liked the way Wade didn't overdo anything, and looked comfortable; Lionel Richie asked him to just relax a bit and enjoy the ride a little more.

Wade sang "Rocket Man" in the Elton John round, complete with bedazzled giant sunglasses to honor the pop legend. Lionel told him he's doing something very right in playing with the character on this song.

For Mother's Day, Wade wrote a touching letter to his stepdad, thanking him for being a real father and role model. He added that his mom is and has always been his best friend; the song he chose was KISS's "Hard Luck Woman." Luke said his tribute to his parents was worth everything for the entire season. Lionel and Katy agreed this is just the beginning for him.

Laci Kaye Booth
Miranda Lambert's "The House that Built Me" was Bones' selection and he says he chose it because it doesn't just fit Booth's sound, it's her story. Bryan said he's glad they saved her last week and she gave them soulful style that was one of her best songs of the whole competition. Lionel says the song fit her perfectly; and Katy encouraged her to keep taking chances.

"Saturday Night's Alright (For Fighting)" is Laci's tribute song to Elton. Katy called her a pop star and likes that Laci has a lot of different sides to her performing; Lionel praised her for doing things her own way, in her own style.

Laci paid tribute to her grandma, which included a photo gallery of Laci through the years. She thanked her grandmother for raising a strong mom, and now strong granddaughter. She sang Fleetwood Mac's "Dreams" for her hero. Katy appreciated the song choice and said she feels like everyone in the competition's mom right now. Luke thinks she shows much promise for the future and the song gave him a complete picture of what she can bring to the music world.

Alejandro Aranda
Bones' playlist included Bob Marley's "No Woman No Cry" for the Southern California singer. Katy says it feels like she watched him, in real time, step into his power. Luke told Alejandro he thinks the newcomer will change the music world.
Alejandro sits behind the piano for his version of "Sorry Seems to be the Hardest Word." Luke told him he's owning the night and advised him to wrap his head around the fact that he's going to be a big star. Lionel says the sky's the limit for Alejandro.

Alejandro dedicated his original song "Blesser" to his musical mentor, whose stage name is "Twin Shadow." His real name is George, and Alejandro says he was the first person who believed in him. He gets a standing ovation from the crowd AND the judges. Lionel lets America know we are watching a phenomenon; Katy told him to "stay humble, Homie." Lionel said he wasn't worthy to judge Alejandro, he's more comfortable being his champion.

Laine Hardy
The teen was assigned the Marshall Tucker Band classic "Can't You See." Katy told Laine he wants to see him fight even more for his final two songs and to treat his guitar like his girlfriend... and to treat her right.

In the Elton John round, he sang "Something About the Way You Look Tonight." Katy thinks his hard work is paying off; Luke felt like they heard him really singing during this round; and Lionel asked if Laine's been raiding his closet because he's dressing with so much panache. He also said Laine has the look and style of a winner. Ryan Seacrest then pointed out Laine is wearing (borrowed) $4,000 shoes.

Laine's hero is his big brother "Bubba" (AKA Kyle). These two are close and it's lovely to see. His tribute song is "Hey Jude" by the Beatles. Lionel reminded viewers to vote! Katy called the song super cool and thanked him for coming back this season to try, try again.

Madison VanDenburg
Her challenge from Bobby was P!nk's recent hit "What About Us." Bones thinks she sometimes hold back and with a P!nk song, you just can't! Luke applauded her for showing up every week and doing the extra things needed; Lionel said she's 17 and ready for show time! Katy advised her to move the "big notes" she usually holds until the end of the song to the beginning and that can help make her win.

"Your Song" is one of Elton John's biggest hits and best known songs and that's the one Madison needed to embrace. She did. Lionel felt she knocked it out of the park.

Madison gives her mom a thank you picture book with some written memories. Mom says she has tears of joy every time she sees her daughter perform. This week on "Idol" was the Bob Dylan classic "To Make You Feel My Love." Katy felt the emotion was so real and called the performance timeless and classic and beautiful; Luke said "powerhouse!"

In the end, the top five were whittled down to the top three thanks to America's votes.