Chris Soules and Witney Carson dance the Viennese Waltz on week 6 of 'Dancing With The Stars.'

LOS ANGELES -- Apparently dancers and television shows take their spring break week a little later than the school kids. "Dancing With The Stars' eight remaining couples will try to inspire the feeling of the wind in our hair, our toes in the sand, dripping ice cream cones, and maybe, just maybe, a little bit of partying with a tall, cool drink. Everyone was assigned "double duty" for round six and performed a team dance as well. There seemed to be a little confusion about whether or not there would be an elimination. Host Tom Bergeron told us there would be a double elimination next week. What about this week? Yup, we said goodbye to one class act at the end of the show! 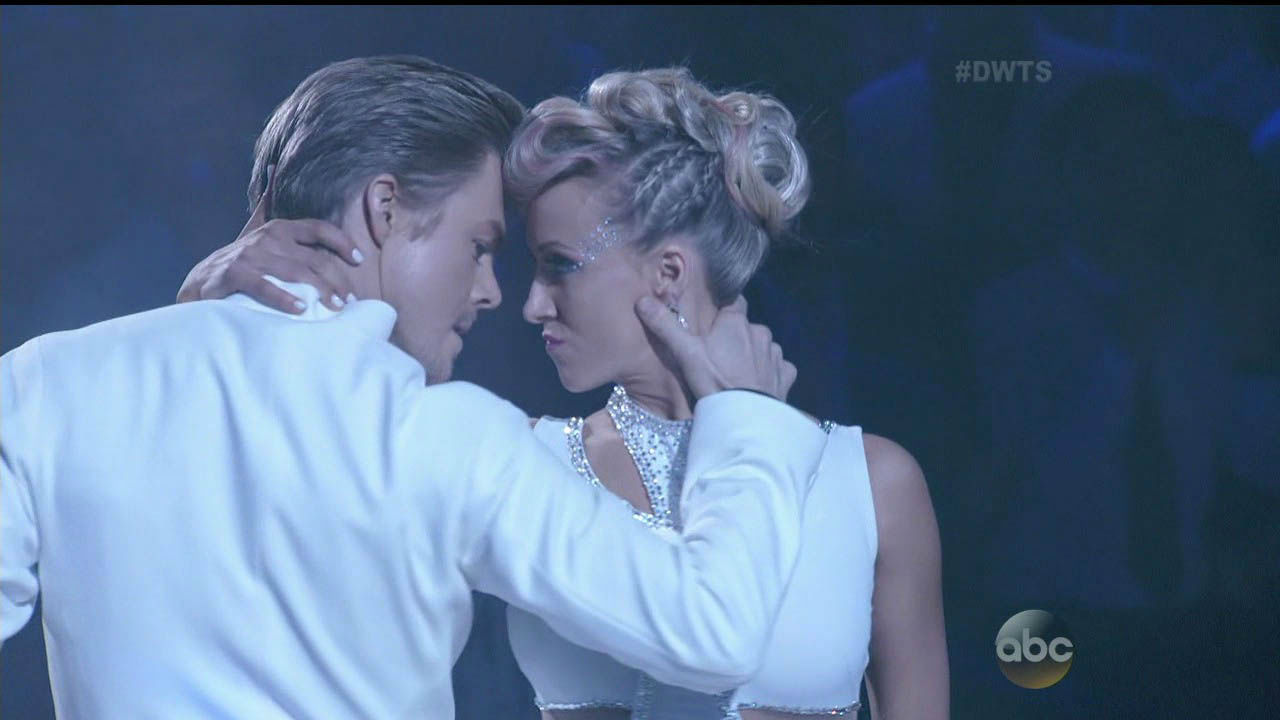 RIKER LYNCH - 37 out of 40 for Samba; 39 for #TEAMTROUBLE; TOTAL: 76
Riker and Allison Holker had a rough start to their week of rehearsal. They were assigned the song "Work it" by Missy Elliot and Allison felt very strongly that it was too sexually explicit for the fair-haired young man. They were able to change songs well into the week. Add that with Riker's concert schedule with his band and the rehearsal time was minimal. And Samba no less! But the Hough genes came shining through and Riker had a blast. He is definitely an audience favorite. Carrie Ann Inaba and Bruno Tonioli awarded them 10's, with Carrie Ann calling herself an official fan girl. Len Goodman was a little less generous with his words, and his scoring, but Riker still came out on top.

NASTIA LIUKIN - 34 out of 40 for Tango; 39 for #TEAMYOLO; TOTAL: 73
Nastia got busted by the judges for being too determined and focused. What? That's a bad thing? Well, it's great in the solo gymnastics world, but she still hasn't mastered the art of becoming one with a partner. Julianne felt a disconnect between the partners; Len didn't think the dance had enough Tango variety. Bruno praised her ability to attack the dance but felt she lost the subtlety of movement and Carrie Ann advised her to get out of the gymnastics mindset and just allow herself to dance. P.S. I wonder what Derek Hough thought when Nastia said his coaching style reminded her of her dad!

WILLOW SHIELDS - 34 out of 40 for Salsa; 39 for #TEAMYOLO; TOTAL: 73
Willow had some unusual news from the doctor this week. She'd been having some issues with her ribs. She had X-rays taken, thinking she might have cracked or bruised something. Nope. Turns out she has extra ribs. Too many bones in that girl's body! Mark Ballas choreographed a fun and very fast Salsa to the familiar tune "Tequila". Bruno called it a high-spirited performance and Carrie Ann thought it was sassy without being overtly sexy.

RUMER WILLIS - 32 out of 40 for Jazz; 39 for #TEAMTROUBLE; TOTAL: 71
It's Rumer and Val's destiny to get "bootylicious" this week with a sexy Jazz routine. They have some fun asking the other dancers to define "bootylicious", and Val seems a little bit shy about having a whole lotta booty shakin' going on. They get a little help from the troupe gals and a new Destiny's Child comes to life. The judges were decidedly split. Julianne and Carrie Ann were underwhelmed, while Bruno loved the raunchiness. Len brought out his old school curmudgeon and said this is a ballroom not a bedroom, and the routine was a bit much for him. Ever classy Val agreed with Len, and admitted he's a purist too, but he was given an assignment and if they gave you a CD with "Bootylicious" on it, you've got to bring a little raunch.

CHRIS SOULES - 31 out of 40 for Viennese Waltz; 39 for #TEAMTROUBLE; TOTAL: 70
"The Bachelor" is still nursing a sore calf and a bruised ego from last week's scores and comments. He and Witney Carson take the judges' comments to heart and work especially hard on their Viennese Waltz. We see a fun "Footloose" themed montage to "Let's Hear It For The Boy" that highlights Chris' week. Bruno felt Chris had an awakening this week. Carrie Ann said she had been wooed by their romantic dance, Julianne was blown away by his confidence and Len liked the feel and the romance but thought the routine lacked detail.

NOAH GALLOWAY - 29 out of 40 for Rumba; 39 for #TEAMYOLO; TOTAL: 68
Welcome to the world of reality TV, Mr. Galloway. The pre-dance package showed a minor tiff he and Sharna Burgess had during a rehearsal. It visibly upset him that the incident showed her in a bad light. For the sixth week, Sharna choreographs a great routine that fits Noah's abilities to a "T". The judges all encourage him to "shake it off', with Julianne complimenting his hip action, Bruno appreciating how magnetic the duo is, and Len simply told Noah he never ceases to amaze him.

PATTI LABELLE - 29 out of 40 for Quickstep; 39 for #TEAMTROUBLE; TOTAL: 68
Both Patti and Artem humorously reveal that neither one has a clue what spring break is: he's from Russia, she's been working her whole life. Spring break is not in the vernacular. Patti is light on her feet for a fun quickstep to Martha and the Vandella's "Heat Wave." And she's having so much fun, she actually kicks off one shoe during the dance. Ever the pro, Patti keeps kicking and single shoes it until the end. The judges' faces light up when she's on stage, and they all had complimentary things to say.

ROBERT HERJAVEC - 28 out of 40 for Jive; 39 for #TEAMYOLO; TOTAL: 67
Robert and Kym Johnson are back to their Barbie and Ken adorableness. Or maybe since we're dancing jive to the Beach Boys it's more like Frankie and Annette? The low scores and not so nice comments from the judges after last week's "Step In Time" lit a fire under Robert and he rehearsed like a crazy man. Carrie Ann agrees that they are just plain cute together and while Robert thought he got all of his steps in, he didn't quite have them all in sync with Kym. The other judges chimed in and agreed.

"Team Yolo" was comprised of Nastia, Willow, Noah and Robert. They did a very cheeky, beachy, fun dance to "Wipeout" and earned 39 out of 40 points from the judges.

"Team Trouble" was made up of Rumer, Chris, Riker and Patti. Again, fun and fast and a judge pleaser. And again, 39 out of 40. So basically the team dances mean nothing as far as changing any scores!

The two couples in jeopardy at the end are Patti and Artem, and Robert and Kym. And the class act of the ballroom, Miss Patti LaBelle, has danced her last dance.
Related topics:
arts & entertainmenttelevisiondanceabcdancing with the starshollywood wrapballroom dancingreality television
Copyright © 2020 KABC-TV. All Rights Reserved.
RELATED