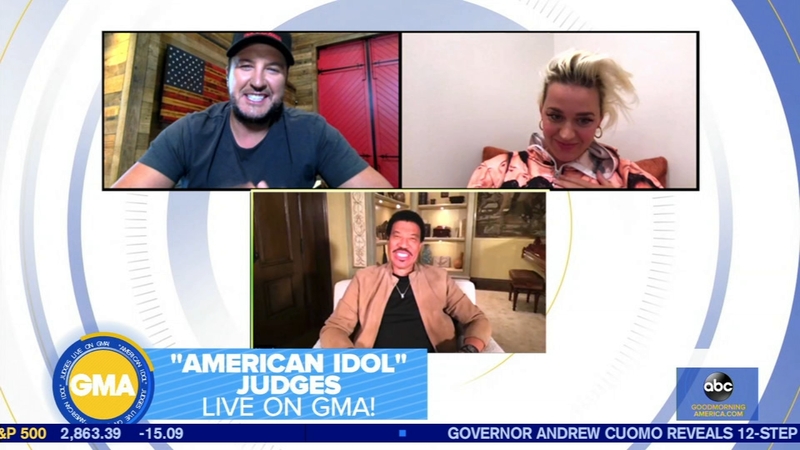 'American Idol' judges talk about which songs remind them of home

NEW YORK -- After their first of its kind "American Idol" from home episode on Sunday, the judges appeared live Wednesday morning on "GMA" and "Live with Kelly and Ryan."

The show featured the top 20 contestants performing from their homes all over the country and the judges giving their feedback, also from their own homes.

"The thing about me is I live 25 miles out of Nashville, so it's in the country and the wifi can go in and out, but we worked the bugs out," Luke Bryan said.

Without a screaming and cheering audience and a live band, the contestants really had to focus on the quality of their voices and work the camera.
"It was basic 101 called, 'Can you entertain somebody,'" Lionel Richie said.

The judges had a great exchange based on the songs that best described their time at home. Check it out in the video above.

On "Live with Kelly and Ryan" Richie said, "I can't get over how it's 35 years later," about his hit "We are the World" and how it still holds up today. "It doesn't even need new lyrics," he said.

Bryan, meantime, showed off his pet turkey to the "Live" hosts. "I love that the turkey is in the house," Kelly Ripa said.

Perry, while wearing an Orlando Bloom onesie, talked about her pregnancy with her baby girl and trying to curb her cravings. "I have to steer clear from commercials and advertising!"

But while talking about the contestants - one thing was clear. "These kids have pulled off magic," Richie said. "They're doing such a fabulous job. You've got the best of the best."

This Sunday night, the top 20 contestants will be reduced down to 10, based on America's vote. Don't miss it at 8 p.m. EDT on ABC!
Report a correction or typo
Related topics:
arts & entertainmentgmalive with kelly and ryanlionel richiekaty perryluke bryanamerican idol
Copyright © 2021 KABC-TV. All Rights Reserved.
More Videos
From CNN Newsource affiliates
TOP STORIES