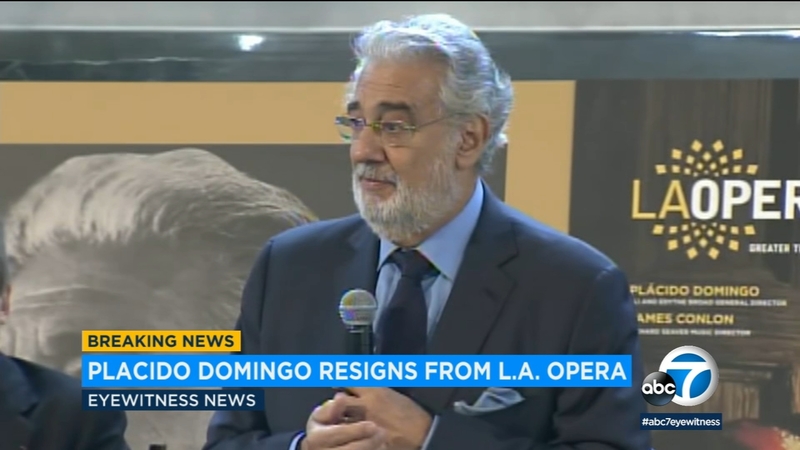 LOS ANGELES (KABC) -- In the face of sexual harassment accusations by as many as 20 women, Placido Domingo resigned Wednesday as general director of the Los Angeles Opera.

In a statement Domingo sent to the L.A. Opera, the 78-year-old opera legend said the accusations "that have been made against me in the press have created an atmosphere in which my ability to serve this company that I so love has been compromised.''

He said he will continue to working to "clear my name,'' but said it was in the "best interests of L.A. Opera'' for him to resign.

"I do so with a heavy heart and at the same time wish to convey to the company's dedicated board and hard-working staff my deepest wishes that the L.A. Opera continue to grow and excel,'' Domingo said.

Domingo last week withdrew from the New York Metropolitan Opera's production of Verdi's "Macbeth,'' following reported concerns expressed by employees of the Met about his appearance despite the allegations.

The accusations against Domingo were first reported in August by The Associated Press, which wrote that he had pressured women into sexual relationships, and sometimes professionally punished those who had rebuffed him. The initial AP report cited nine women, all but one of whom had been granted anonymity; a subsequent report cited 11 more women, one of whom was named.

The Philadelphia Orchestra and San Francisco Opera have also canceled appearances by Domingo, who has vehemently denied the allegations against him.

The Executive Committee of the L.A. Opera Board of Directors issued a statement saying, "Placido Domingo's contributions to the cultural life of Los Angeles have been unprecedented and profound. He is not only an outstandingly talented artist, but also the driving force behind the creation, development and growth of L.A. Opera.

"Under his leadership, L.A. Opera became known for its spirit of collaborative creativity and its ability to attract superb performers from across the globe -- including Placido himself, who delivered more than 300 performances in 31 different roles and conducted more than 100 times in Southern California over the course of the past five decades. We thank Placido for popularizing opera in the consciousness of Los Angeles and are deeply grateful for his inspiration and dedication to our institution and our community.''

The L.A. Opera had announced in August that it would hire an attorney to conduct an investigation into the allegations, saying at the time, "We believe all employees and artists should be treated respectfully and feel safe and secure within their work environment.''