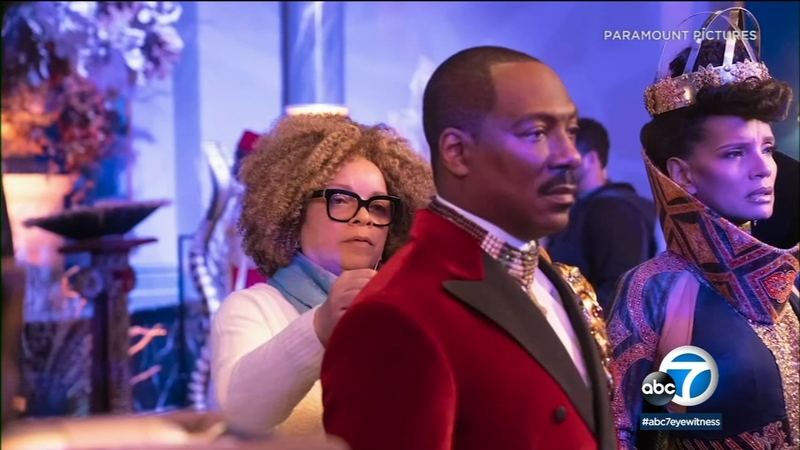 HOLLYWOOD, LOS ANGELES -- For just the second time ever, a costume designer has received a star on the Hollywood Walk of Fame.

Carter has been working in the entertainment industry for more than 40 years. From her long-time collaborations with Spike Lee, including "Do the Right Thing" to her work with Steven Spielberg in "Amistad" and with Ryan Coogler for "Black Panther," Carter has left an indelible mark in Hollywood.

"Nothing was handed to me. Every moment, every sacrifice, every effort was hard work, inspired by my passion," said Carter.

In 2019, "Black Panther" helped her make history as the first Black woman to receive the Oscar for costume design. She's worked with both Oprah Winfrey and Eddie Murphy many times over the years. Murphy simply calls her a genius.

"I've never had a wardrobe designer whose clothes actually influence how you play your character, how you walk, how you stand; she really is instrumental in bringing your characters to life," Murphy said.

"Ruth holds within her an awareness of our culture and knowledge of our history and is able to beautifully weave the two together to create fully-formed characters before they even speak a word," said Winfrey. "I say this from experience."

At her virtual ceremony, Carter dedicated her star to all the aspiring filmmakers and crafts people who are still dreaming.

"It's my hope that anyone who sacrifices, who beats these streets of Hollywood carrying their dreams and heavy garment bags full of costumes, desiring to be the best, like I did, that when you gaze upon my star, feel my energy, feel the power of your own unique story to realize your dreams so you too can reach your star," said Carter. "Wakanda forever!"
Report a correction or typo
Related topics:
arts & entertainmenthollywoodmoviesmoviehollywood walk of famecostumesblack panther
Copyright © 2021 OnTheRedCarpet.com. All Rights Reserved.
More Videos
From CNN Newsource affiliates
TOP STORIES