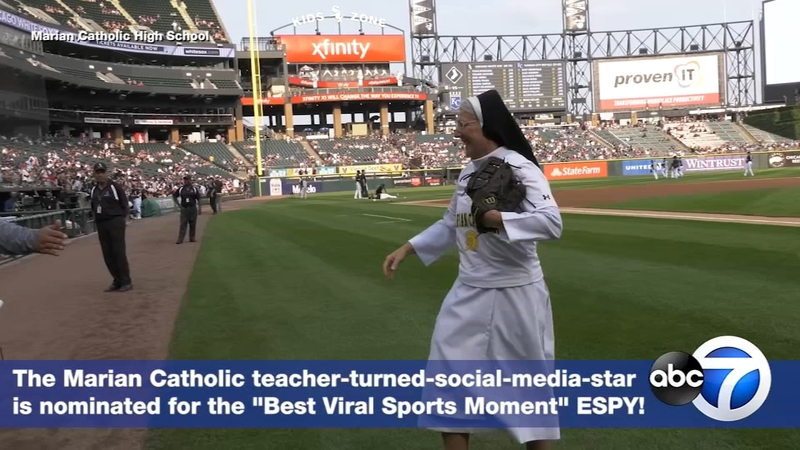 "Someone mentioned to me, 'I bet you're going to be nominated for an ESPY.' I said 'no,'" Sobieck recalled Monday.

"'Why not, it's been all over the place. It's been on ESPN, you did an interview with Golic and Wingo, it keeps popping up...yeah, I bet you will. You'll get an invitation to go, at least,' Sobieck added from the exchange, going on to say, "So it's kind of been... a running thing, like 'wouldn't that be something,' and so when I got the invitation... 'that is really something.'"

Sister Mary Jo became a viral sensation when she took to the mound, bounced the ball off her bicep and threw a perfect strike during a ceremonial first pitch, earning the moniker "Curveball Queen."

Earlier this month, Sister Mary Jo was a contestant on Nickelodeon's "Are You Smarter Than a 5th Grader" and in April, she received her own 2019 Topps Allen and Ginter Baseball Card.

Fans have the chance to select the ESPY "Best Viral Sports Moment" winner by voting online at ESPN.com/ESPYS. Voting ends when the ESPY Awards begin on Wednesday, July 10.

"Vote for me just because I hopefully touched something in you that draws out your greatest potential," Sobieck said.

The ESPYs bring together the sports world to celebrate the best moments of the past year. Sobieck said she's looking forward to meeting this year's recipient of the Jimmy V Award for Perseverance.