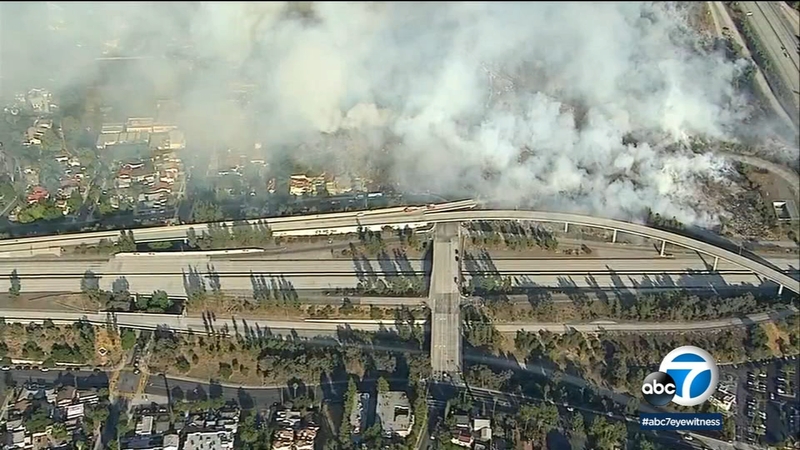 EAGLE ROCK LOS ANGELES (KABC) -- Evacuations were lifted in Glendale after a brush fire erupted off the 134 Freeway in the Eagle Rock area Sunday.

The brush fire started around 4 p.m. along the 134 Freeway near the 2 Freeway.

The fast-moving fire jumped across the freeway, burning uphill and coming close to homes in Glendale.

100 homes in Glenoaks Canyon were given evacuation orders.

Residents in the Glenoaks Canyon area were allowed to return to their homes at 10 p.m. Fire crews remained on scene to ensure containment.

All lanes were closed in both directions near the Harvey Drive exit Sunday.

Spread of the fire was stopped in all directions with the size held to approximately 30 acres. Containment was at 25% by 8 p.m.

There was fire on both sides of the freeway and heavy smoke could be seen from miles away.

Mandatory evacuation orders were placed on Glenoaks Boulevard from Mount Carmel Drive to Bywood Drive including all streets in between, according to the City of Glendale.

Over 215 members of the Los Angeles Fire Department were assigned to the incident, with additional resources from Glendale Fire and Los Angeles County Fire. The cause of the fire is unknown.

Helicopters from LAFD and LACF were conducting continuous water drops.