Compton's mayor and city activists shared stories of mistreatment by sheriff's deputies as they called for an investigation into a rogue deputy gang.
KABC
By Carlos Granda and Lisa Bartley 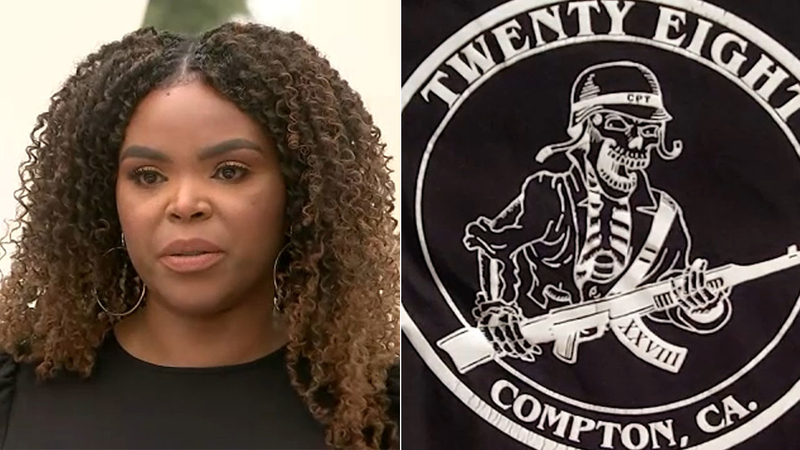 COMPTON, Calif. (KABC) -- Compton Mayor Aja Brown was driving through the city she leads last June when a Compton sheriff's deputy flipped a U-turn and pulled her over. Brown was in her family car, along with her husband and baby daughter.

"I rolled my window down and asked why I was being pulled over," Brown recalled Tuesday outside Compton City Hall. "Within seconds almost seven to nine sheriff deputy vehicles descended upon the scene."

Brown says the deputies claimed she ran a red light, something she adamantly denies.

"They ordered me out of my vehicle and they asked me to put my hands on top of the police vehicle so they could search me as if I were a criminal," Brown said. "Mind you, I was accompanied by my husband and my infant daughter in the back seat. I did not look like someone that is trafficking drugs."

Brown says the deputies searched her husband and her car for drugs, finding nothing. She recalls that a watch commander from the Compton station got involved and while deputies initially gave her a ticket, they then took it back.

"My infant daughter was screaming at the top of her lungs," Brown said, adding that while she filed an official complaint with the LASD, she's received no satisfactory answers.

"They terrorize the community and then they cover their tracks," Brown said. "It is unacceptable, we will not take this."

Mayor Brown's account came as city and community leaders called for a federal and state civil rights investigation into the Los Angeles County Sheriff Department's Compton patrol station. The station's deputies have been in the spotlight since news surfaced last week of an alleged deputy gang with matching tattoos known as the "Executioners."

Deputy Art Gonzalez blew the whistle on the alleged gang of deputies in a newly filed government claim, the first step toward filing a lawsuit.

Deputy Gonzalez says that the "Executioner" deputies celebrate shootings of citizens with tattoo parties, set illegal arrest quotas and retaliated against him when he reported one alleged "Executioner" deputy for beating up a fellow deputy outside the patrol station earlier this year.

"Deputy Gonzalez, he's afraid for his safety right now as he should be," attorney Alan Romero told Eyewitness News. "This is a violent gang, you know - violence, shootings, beatings."

Community leaders at Tuesday's press conference say that unwarranted arrests and aggressive deputies are nothing new in the city of Compton.

Derrick Cooper is the founder of the L.A. City Wildcats Youth Academy in Compton. He was arrested last fall while preparing for a pre-Thanksgiving meal for kids in his group.

"I don't even know what I'm being arrested for," Cooper recalled. "I was shipped in a bus down to county jail, I was so humiliated to be locked in a shower, butt naked with over 200 men waiting to be processed."

Cooper says the deputies told him he "fit the description of someone they were looking for."

"This has got to stop," says Cooper, adding that deputies hauled him away in front of his youth group and released him from jail the next day with no charges. Cooper says the department later apologized.

Jermelle Henderson says he was pulled over at gunpoint by sheriff's deputies in Compton last month.

"She just pulled me out, grabbed one of my arms like this, pulled me out and put me in handcuffs," said Henderson. "I asked her why was she doing this? She said, 'Oh, this is what we do in Compton.'"

Henderson is a successful restaurant owner who city officials describe as a community partner, contributing to toy and food drives.

"He's not a gang banger, he's not a drug dealer... he makes food for our community," said Henderson's attorney Walter Mosley. "He didn't know if he was going to make it back home from a traffic stop."

"We demand justice from the Compton sheriffs and we will no longer continue to pay you $22 million to terrorize this community," said Mayor Brown, who takes issue with Sheriff Alex Villanueva's statement last week that "no gang of deputies is running any station right now."

In a statement released Tuesday, the LASD said: "We are aware of the allegations regarding Compton Station and have launched multiple investigations. Early on, the Sheriff invited the Federal Bureau of Investigation to conduct their own investigation and information is actively being shared with them.

"We send a clear message to the L.A. County Sheriff's Department that you clean up your house, get your house in order or we will surely help you do that," says Compton Mayor Pro Tem Michelle Chambers. "You have Executioners, you have gangs in your house!"