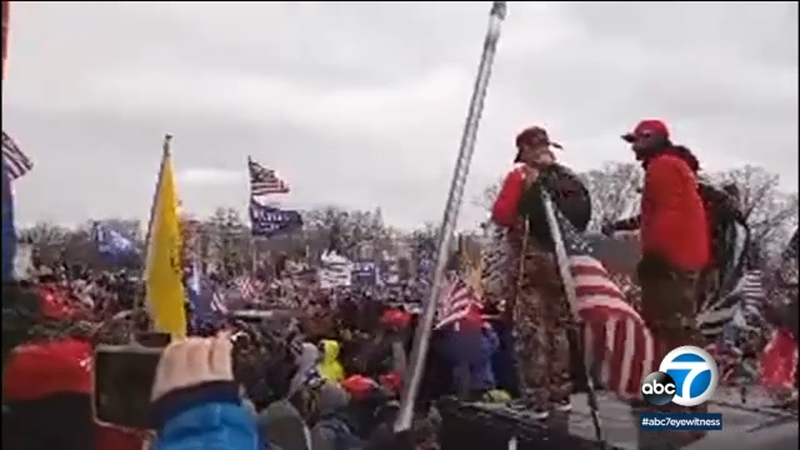 The day after the first insurrection at the U.S. Capitol in more than 200 years, we're learning more about some of the right-wing extremist groups involved in the riot.

"The individuals who stormed the Capitol were a mixed collection of folks who include militant Trump supporters, election deniers and Alt-Right Folks," said Brian Levin, director of the Center for Study of Hate and Extremism at Cal State University San Bernardino.

"We had Nazis. We had a confederate flag inside the Capitol," said Levin. "And we didn't even see that during the Civil War," he said.

Pictures released by Washington, D.C. Metropolitan Police of some of the rioters include one of a tattooed man wearing a fur and horns, identified as Jake Angeli, who is a well-known Q-Anon supporter.

"Q-Anon is a bizarre conspiracy theory, which is anchored in this mystery of this fellow Q... who is supposed to be feeding information to folks about how President Trump is protecting the country."

An eight-hour long video posted to YouTube showing an unedited look at the Save America March that devolved into a riot inside the U.S. Capitol also gives hints as to which groups were involved.

The Instagram page for The Red Elephants, a group that promotes conspiracy theories and white supremacist ideas, boasted about pro-Trump supporters who "successful stormed the Capitol building."

One of the photos released by police also show a man wearing a beanie promoting the Oath Keepers.

Brian Levin said many of these groups have a strong following in Southern California.

"For instance, at the big anti-Muslim rally we had in San Bernardino back in 2017, we had Oath Keepers and we saw Proud Boys," he said.

Levin said many of the groups exist in a ring around Los Angeles, in areas that are more rural.