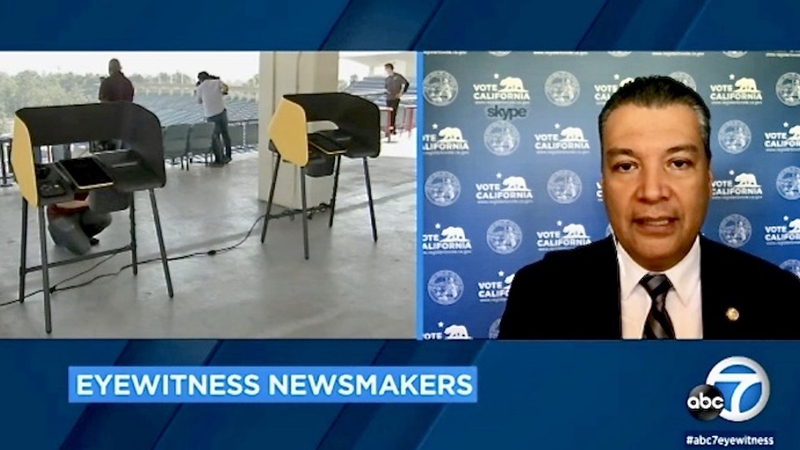 LOS ANGELES (KABC) -- This year, the California Secretary of State has added a tracking tool to follow your ballot if you sign up for it.

In a message on Facebook, he accuses the opposition of fraud, calling on the president's supporters to turn out as an army at polling places.

Padilla, who is California's chief elections officer, says it's legal, as long as observers stand back, and they have no electioneering labels like hats or signs.

"California law does allow for election observation," he said. "But let's be clear here, voters also have the right to be able to register and cast their ballots free of any harassment or intimidation. So, if there's anybody that is approaching a voting location, be mindful of that. If you're there to observe, that's one thing. If you're there with a political statement or a message or trying to discourage or intimidate voters from participating, that is against the law and the authorities are standing by to take measures against them."

State Republican lawmakers are accusing the secretary of state of spending on a $35-million voter effort that should have been shared among 58 counties.

Padilla said it was within his authority to keep the messaging consistent.

"We do have the authority and state law to partner with counties and administer this campaign and partner with them, and in some elements on their behalf," he said. "Voters, again, deserve to have information on how to be able to vote and stay safe this November and that's exactly what we're doing."

The president has urged voters to both vote in person and by mail, which is a federal crime.

The secretary of state says a voter won't be able to get away with it, anyway, because every ballot has a bar code.