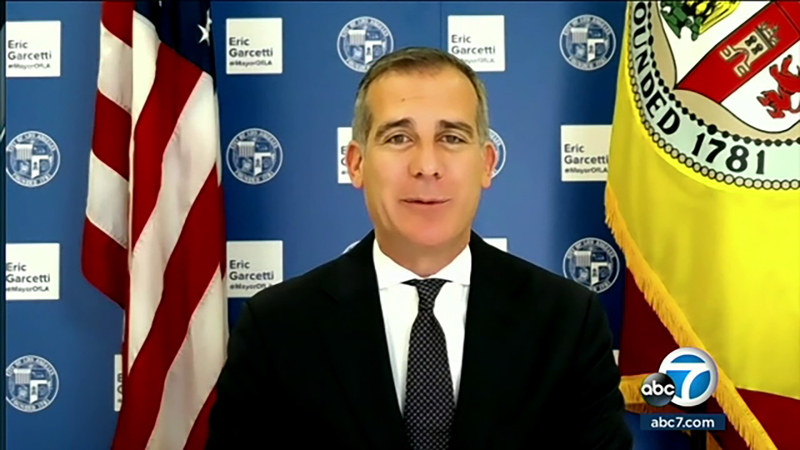 LOS ANGELES (KABC) -- Mayor Eric Garcetti is sending out a message that hope is on the horizon on several fronts. On Eyewitness Newsmakers, he said relief is on the way for people struggling in the pandemic.

Congress will triple housing assistance for landlords and tenants, sending $250 million - which could include back rent as well. The mayor said millions more in rent relief is on the way when it's all added up.

"We could see as much as $300 or $400 million to more than quadruple what we gave out in December. So the important thing as a landlord is to make sure that your tenants know about this, that they sign up."

If the rate of COVID-19 rate continues to trend downward, Los Angeles could move out of the most restrictive purple tier in about a week, leading to a partial reopening of businesses like restaurants.

"We are on the verge of the red tier, which will allow indoor dining if the county authorizes that at 25%," Garcetti said. "And if this trend continues, we could expand beyond 25%."

The mayor thinks schools can open by April. He is willing to help open the Dodger Stadium vaccination site on Sundays to expedite teacher vaccines. He's offering his help in negotiating the reopening, if asked.

"I think it's such a reflection of how poorly this nation has gone that our children have been left behind. And that here we have cardrooms that opened before classrooms did. That is inexcusable."

Many viewers asked how homeless encampments are allowed to keep growing. The CDC recommends against moving unsheltered people in the pandemic.

Mayor Garcetti says the one-shot Johnson & Johnson vaccine would be good for this population.

"Let's get them the vaccines. Then let's have an honest conversation about making sure we get those cleanups in a humane way, with services and showers and housing referrals and really help people get off the streets. It looks like zombieland in too many places."

Viewers asked the mayor if he regrets changing his endorsement to George Gascón for Los Angeles County district attorney over incumbent Jackie Lacey.

He said he stands by his support of Gascón to "turn a different page" but he may not agree with all his directives.

"When I support people, it doesn't mean I agree with 100% of what they do. I'm following these things closely. Where I'll disagree, I won't be shy about speaking out."