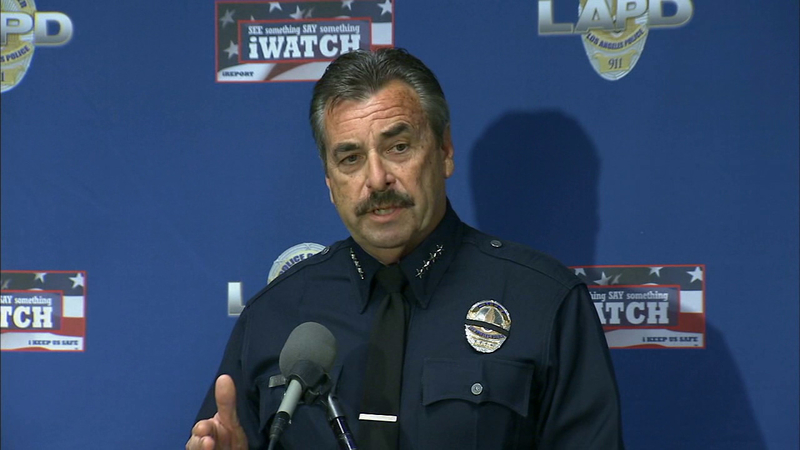 The report was made public more than four months after Ford, 25, was fatally shot by LAPD officers in South Los Angeles near his home on the 200 block of West 65th Street on Aug. 11. Family members say Ford was mentally challenged and harmless.

"Let the system work ... we will find out the truth of what happened on that August night," Beck said during a news conference.

Police said Ford was resisting arrest and was able to force one of the officers to the ground. While Ford was on top of the officer, he "grabbed the officer's handgun and attempted to remove the gun from its holster."

Ford was declared dead at a local hospital. No officers were injured.

"There is nothing in the coroner's report that is inconsistent with the statements given to us by the officers," Beck said.

However, witnesses dispute the officers' account of the incident. Some witnesses told reporters Ford was face-down on the ground when he was shot.

While the LAPD says the autopsy report doesn't prove or disprove police misconduct in the case, Steven Lerman, the lawyer representing the Ford family, says the fact that he was shot in the back is crystal clear proof.

"I dare say that this is criminal, I think they executed this poor young man, mentally incompetent man," Lerman said. "Defenseless, harmless, unarmed."

The delay in releasing the autopsy report was the result of a $75 million lawsuit the Ford family filed against the city, Beck said. Lerman had a long list of witnesses to the shooting, but according to Beck, none of those witnesses agreed to be interviewed by investigators.

"These witnesses are more than willing to give deposition testimony in a court of law and that's where it should be," Lerman said.

"Any information regarding this incident will help us complete this picture," Beck said.

Officers Sharlton Wampler and Antonio Villegas were identified as the two officers involved. They have both been assigned non-field duty.

Following the release of the autopsy report, LAPD officers were placed on tactical alert, which allows the police department to increase its manpower by holding officers past the scheduled end of their shifts.

A peaceful protest was held Monday night in the Crenshaw District. A group of about 30 protesters also briefly blocked lanes of traffic on the southbound 110 Freeway between Gage and Slauson avenues in South Los Angeles.

The NAACP of Los Angeles says this community needs healing.

The Board of Police Commissioners will determine if police misconduct occurred. The county district attorney's office will separately determine if the shooting was justified or if charges should be filed.